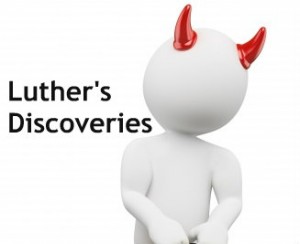 For the past couple weeks I’ve spent time with a good friend, Martin Luther.  It’s been a rich and fruitful time! I would encourage anyone to do the same.  As I was rereading Luther’s Lectures on Galatians (1535) and Heiko Oberman’s biography Luther: Man between God and the Devil (A must read!), I was struck by the dramatic change that was caused by Luther’s personal discovery of God’s character and what he would call the “white devil.”

Before he became the famous Reformer, “stubborn and unbending” in his pursuit of Christ and standing up to both Emperor and Pope, Luther was not all that remarkable.  For example, he was not an outstanding student, finishing thirtieth of fifty-seven candidates in his first university exam.  He probably only received an education because of his mother’s social status and connections, rather than due to his abilities.  Luther was a normal man, nothing special.

So what happened?  What caused Luther, the unimpressive student, to become the remarkable Professor of Biblical Theology at Wittenberg?

Luther discovered and experienced the reality of God’s goodness–that is, God giving of himself to us.  By faith we are united to his Son, our Bridegroom, who paid for all our sin on the cross and we receive all that is his–life, glory, and love.  Having true union with Christ means that the Father relates to us as perfectly righteousness in Christ and faith is the certainty that this is true (despite still living in our fallen flesh with the enemy telling us otherwise).

There was another critical discovery for Luther’s personal reformation and the Reformation, a clearer and biblical view of “our adversary, who prowls around and seeks to devour us.”

Luther’s Discovery of the true Satan: The existence of the devil wasn’t a question for anyone living in the medieval period.  However, just like the righteousness of God, the reality of the enemy and his deceptive methods were greatly twisted.

The medieval images of Satan as the red beast with horns and pointed tale surrounded by his demons are well known to us.  He enticed people to commit and participate in his evil so that he could have control over them in the fiery depths of hell.  This foe, the “dark devil,” prompts people to “overt acts of evil” like murder, theft, drunkenness, etc. –an idea well known to Luther and his contemporaries. But Luther, as an overflow of his experience of God’s true righteousness, suddenly was confronted with the real Satan, the “white devil.”

Thus the black devil always emerges in the disguise and covering of all his works and tricks. But in the spiritual area, where Satan emerges not black but white, in the guise of an angel or even God Himself, there he puts himself forward with very sly pretense and amazing tricks.  He peddles his deadly poison as the doctrine of grace, the Word of God, and the Gospel of Christ. This is why Paul calls the doctrine of the false apostles and ministers of Satan a “gospel,” saying, “to a different gospel.” (Gal, 49)

The false gospel for Luther mixed the Law and the Gospel.  To preach righteousness and holiness is to “hate and condemn as evil and demonic the righteousness of Christ.”

This means that sin isn’t just vice, ruled and promoted by the dark devil, but also seemingly virtuous morality, ruled and promoted by the white devil–the real devil transformed into an angel of light.  Actually, then, vices of slander, adultery, covetousness, and others, for Luther, are “minor compared” with the world when “it is at its best in men who are religious, wise, and learned; yet in them it is actually evil twice over.” (Gal, 40-1)

What did this mean for Luther? Luther realized that he lived in a constant tension between the truth of being in Christ by faith, yet with our flesh and the enemy enticing us to take our eyes off that truth.  The Law, then, had no place for him because it was a means to cause us to feel and know that we are sinners, the exact opposite reality of the Gospel.

Therefore the doctrine of grace simply cannot stand with the doctrine of the Law.  One of them must be rejected and abolished, and the other must be confirmed or substantiated.  But just as the Jews were inclined away from this doctrine of faith and grace, so we also are inclined away from it.  I personally would like to keep both the righteousness of grace as that which justifies and the righteousness of the Law as the basis for God’s attitude toward me.  But, as Paul says here, confusing these means perverting the Gospel of Christ. (Gal., 54)

For Luther, it was no surprise that the Law and works would often win out.  It is the gravitational force of our flesh to prefer Law and works over grace.  This was the battle Luther recognized in this life.  However, God’s attitude toward us is constant, for we are always seen in Christ.  Thus the Father’s love for us can never increase or decrease.

How often do the world and our flesh tell us that what people think of us, combined with how we perform, determine who we are as a person?  The Gospel proclaims the exact opposite message: the Son of God is our Bridegroom, he has taken all our debts and given us all his riches!

One Response to Luther’s Discoveries