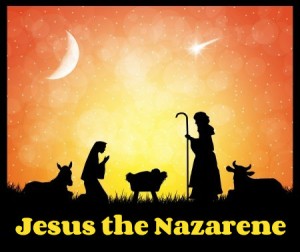 Why does Matthew end his great Christmas narrative with a whimper?  Other sections of his gospel finish with strong summaries, so why not the first two chapters?  Why have a great story end with some geographical details, an obscure reference to an unidentified prophecy and a comment about Jesus being called a Nazarene?

After fleeing to Egypt, another angelic visit prompted Joseph to return to Israel.  Herod’s replacement was a frightening prospect, so rather than heading back to Bethlehem, another dream directed him back home to Nazareth.

Nazareth – Joseph knew what would face the family in the hometown where everyone knew this couple so well.  How would he rebuild his business when everyone doubted his word on family matters?  How would Mary face the snickers and gossip that would accompany the return of “the virgin” with her little surprise?

Matthew finishes the story with a flurry of place names: Egypt, Judea, Galilee—that is, “Galilee of the Gentiles.” This Messiah was not just for the Jews, but for Gentiles too.  Actually, with Jesus growing up in Nazareth, we discover that he really was for all of us.

Nazareth was five miles from Sepphoris, the strongest military centre in Galilee.  Nazareth was on a branch of the great caravan route to Damascus.  For traders, soldiers and travellers, Nazareth was just a rest stop on the way to somewhere better.

Essentially, Jesus grew up in Nowhere, Galilee.  Was this the next best thing since God’s plan A (Bethlehem) had been thwarted by pesky Herodian rulers?  Not at all.  God directed Joseph so that Mary was brought back to Nazareth, and Jesus was brought up there.  This meant that the Messiah born in Bethlehem would always be called the Nazarene.

Prophecy – So which Old Testament passage is being fulfilled?  This has caused some consternation among scholars.  Where does the Old Testament say the Messiah will be raised in Nazareth?  It doesn’t.  So why the fulfillment reference?  Notice that Matthew refers to the prophets, plural.  Perhaps several options should be combined to grasp Matthew’s subtlety here:

Was Jesus considered a Nazirite (Nazir)—a chosen holy one set apart for God’s service from his mother’s womb, just like deliverer Samson and the priest, Samuel?

Certainly, Jesus was the Messianic “branch” (Neser)—the Davidic branch of Jeremiah 23/33, who would reign in righteousness over the earth; the branch who is a priest-king rebuilding the temple in Zechariah 6; the branch from Jesse’s stump anticipated in Isaiah 11 at the conclusion of the royal Immanuel section.

Perhaps instead of choosing one idea over the other we have two of Matthew’s great themes converging: Matthew weaving together priest and king in describing deliverer Jesus.  Again, Matthew brings us back to Isaiah’s Immanuel prophecy that had begun his sequence of fulfillments in chapter 1.

Joseph called his name Jesus in chapter 1, and by the end of chapter 2 it is Joseph that brings him to Nazareth so that all would call him a Nazarene.

Or was Matthew more directly and deliberately pointing to a location, rather than a subtlety in the name itself?  I think so.  Chapter 2 is filled with geographical locations.  Perhaps another prophetic reference can come into play here – Isa.53:2.  This offers no reference to geography, but uses the associated terminology of “a root” in underlining the lowly obscurity of this priest-king.

Jesus knew the life of the poor, as is clear in many of his parables.  Jesus experienced gritty human life.  He was not sheltered in an ivory tower, protected from the “dross of society.”  He lived in the dross and carried it as his label.

Label – Jesus was a common name back then, so he needed an identifier, a nickname to distinguish him from the thousands of other Jesus’ of his day.  Who was his Dad?  That was complicated.  What was his job?  Perhaps too common.  So where was he from?  Nazareth became the label that went with his name.

As we read through the gospels we see the Nazareth label used repeatedly. At the start of his ministry Nathanael reacts to Phillip – “can anything good come out of Nazareth!?”  A demon used the identifier of him, which he accepted.  It was used of him near Jericho and again at the Triumphal Entry.  At his arrest it was the label the arresting party gave, and that Jesus accepted.  During Jesus’ trial, Peter was challenged with the accusation of being with the Nazarene.  On the cross, the inscription carried the place name.  After his resurrection, the two disciples on the road to Emmaus referred to it, as did the angel at the tomb!

God with us, God like us.  Immanuel, from Nazareth.  God with us, not just near us.  With us, like in “Nazareth with us.”  Jesus of Nowhere, Galilee.  He came to be with us, so that he could be for us.  And he is forever with us, for he still carries the lowliest of labels.  It was all part of God’s plan, that he should be called a Nazarene.  What better way to climax the Christmas narrative than this.

One Response to Jesus the Nazarene