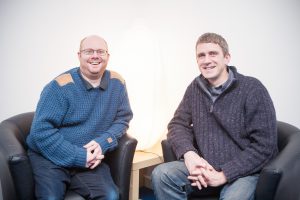 Peter Mead grew up in Bristol, before studying at Multnomah Biblical Seminary and Gordon-Conwell Theological Seminary. He now serves on the leadership of Trinity Chippenham, as well as mentoring with Cor Deo. Peter is married to Melanie and they have six children.

Peter earned his Doctor of Ministry degree at Gordon-Conwell, where he was mentored by Dr Haddon Robinson, author of Biblical Preaching. Peter’s studies focused on the relationship between biblical preaching and the personal spirituality of listeners. His work combined hermeneutics, homiletics and Christian spirituality, which reflects his passions in ministry – equipping people to handle God’s Word, to contagiously communicate it to others, and to grow spiritually.

As well as local church ministry, Peter also teaches preaching with Union School of Theology and leads the Bible Teachers & Preachers Networks at the European Leadership Forum in Wisla, Poland. He authored Pleased to Dwell: A Biblical Introduction to the Incarnation, Galatians: The Life I Now Live, Foundations: Four Big Questions We Should Be Asking But Typically Don’t, Lost in Wonder: A Biblical Introduction to God’s Great Marriage as well as  BiblicalPreaching.net [See “Resources”]. Peter is excited to participate in Cor Deo, not only as a mentor, but also as a member of the team responding to God’s heart together.

Mike was born and brought up in Worcester but his journey to Chippenham has been via Wales. He was an American Studies student in Swansea, had various admin jobs in Cardiff, and then moved to Bangor (North Wales) to work for UCCF for 5 years. Mike loved being part of the 2013 Cor Deo full time program and has since become a key member of the team here in Chippenham.

Mike is heavily involved at Trinity Chippenham and always enjoys speaking when he can, especially to students. He is excited about serving the Lord with Cor Deo.

As well as being a fan of admin, Mike enjoys playing, watching and talking about sport and movies. He also likes reading fiction and recently started to learn Spanish!

Tim Jones from Chippenham.  Tim also has both business and church leadership experience.  Tim served for many years as an elder in his church, and is currently an elder at Trinity Chippenham.  Tim enjoys wielding a chainsaw to cut up fallen trees, a game of squash, and chatting about eternity.  We are so thankful to have Tim on the board of trustees.

Huw Williams from Turin, Italy.  Huw has a background as an orchestral conductor before participating in the first Cor Deo team in 2011.  Since 2012, Huw and his family have served as pastor of the International Church of Torino, Italy.  Huw also co-leads the Bible Teachers Networks at the European Leadership Forum alongside Peter.  We are delighted to have added Huw to the board.

All mentors and trustees adhere to the Evangelical Alliance Basis of Faith.