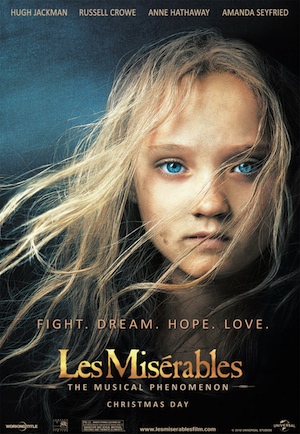 This weekend my wife and I finally got to the cinema to see Les Miserables.  Absolutely fantastic!  Victor Hugo’s epic story of Jean Valjean and his pursuer, officer Javert, is an impressive movie adaptation of the stage musical (which we also want to see again).  Jailed for stealing a loaf of bread to feed his sister’s child, Valjean is finally released after 19 years of hard labour, only to discover his life is ruined by his criminal record.  After stealing silver from a kind priest, the priest’s superabounding mercy grips his heart and gives him a new life.  Skipping parole with a new identity he becomes a respected mayor and factory owner.  Unintentionally destroying the life of his employee Fantine, he sets out to care for her child.  This he does while being pursued by the relentless Javert, who is determined to bring him to justice.  Getting caught up in the Paris uprising thirty years after the story begins, it comes to a gripping climax as the epic sweeps to a close.

I came away with theological themes swirling in my mind and heart.  Let me mention a few.  (I don’t have time to mention the contemporary social justice issues stirred by the film, such as sex trafficking, child soldiers, agony of war, etc.  All worthy of sincere reflection.)

1. The grotesque reality of Satan’s world.  What happens when the goodness is sucked out of God’s good creation?  Fantine’s desperate descent into prostitution is hideous in the extreme.  Later her daughter is “cared for” by the Thenadiers, a couple of thieves living out libertarian atheism in a Paris bar.  While not as repulsive as the brothel harbour scenes, and with the light relief of some humour, their bar is all deceit, innuendo, drunkenness and self-absorption.  Effectively they play the role of atheists that live out the lie that they can rule their own world by their own rules.  And as the master of the house, the self-serving rules bring only loss and death to all around.  There is a sewer mentality and ultimately their attempted infiltration of high society is painfully evident, for self-serving deception can never produce genuine belonging at a grand wedding.  What can?

2. The relentless pursuit of legalistic self-righteousness?  Javert is the officer intent on bringing Valjean to justice.  He refuses to believe that a man can ever be changed.  His world is a deistic world where God exists only as lawgiver and his understanding of the world is the black and white of simple justice and penalty.   Sinners must be judged.  This simplistic mentality may bring order to society, but it never brings life to it.  The hoards are controlled, yet Javert’s worth seems to get wrapped up in bringing the lesser man to justice.  But grace gives life to the “lesser man” and transforms him into one who lives a life and who gives life to others.  Eventually Valjean saves the life of Javert and the legalist is undone by undeserved mercy.  Unable to admit his need, accept equality with a convict, or face a world confused by grace, he chooses to end it all.  This weekend I have read through Leviticus in my read through – what a contrast.  God’s Law reveals His character of care and concern for the downtrodden.  Yet in Javert we see the deadly effect of the law when grace is not in the picture – the letter kills.

3. The life-giving power of grace!  Valjean’s powerful “conversion” is s stirring depiction of a heart captivated by undeserved mercy and life-giving grace.  He has only known a stony heart, but now sings, “what spirit comes to move my life?”  Grace grips a heart and leads it not to the libertarian underworld of the Thenadiers, but the genuine goodness of the kind Mayor (Valjean).  In turn that grace spills over to others as Valjean seeks out and rescues young Cosette, vicariously raising her and in loving her finding life for himself.  Eventually the older Valjean gives her away to young Marius, whom he rescues in the uprising to set up the glorious wedding celebration that climaxes the grand narrative.  His love for Cosette leads him to a greater feat than even Javert’s pursuit of him, but shows how loving others will sometimes lead to a baptism of sewage.  Throughout the story, life is given by mercy and grace, and always at a cost.

What a contrast is depicted between the hideous whoredom forced on Fantine and the glorious wedding of her daughter.  What a grand arc is drawn between the depths of our depravity and the marriage supper to come.  Valjean is at the same time a picture of the sinner transformed by grace who then gives himself away for another, and perhaps even a hint of a rescuer getting baptised in sewage to give himself away and offer life to another.  And while the themes are swirling, it is beautiful to see that death is so sad, but it is never the end.

To find every freedom fighter celebrating in the heavenly conclusion is confused on so many levels (although it is really just a glimpse beyond his own death to the grand barricade of 1848), but still Isaiah’s eschatological themes stir the heart – they will live again in freedom in the garden of the Lord, they will walk behind the plowshare, they will put away the sword, the chain will be broken and all men will have their reward!

May our lives reflect the life-giving grace of the greater epic of which Les Mis is but a small but moving reflection.