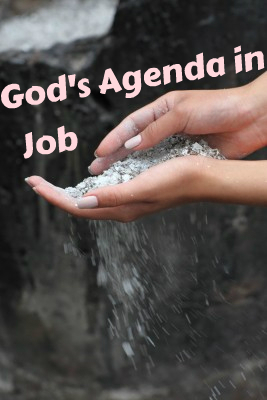 Job’s pain pushed him to ask God for a reprieve and also for an explanation.  In effect, “What, oh my God, are you doing?!”

In the dialogue with his friends Job knew something of what the Bible reader knows from the start.  He was not, as his friends presumed, a very evil man facing God’s proper justice.  Rather he was a remarkably faithful man undergoing a prolonged spiritual stress test.  Job said as much: “when he [God] has tried me, I shall come out as gold” (23:10).

And ultimately Job came through with his faith intact.  But there was room for him to grow; and we can all grow with him.  When we face our own spiritual challenges—and God will allow each of us some golden growth opportunities—we will land somewhere in a wide spectrum represented by Job on the one hand, and his wife on the other.  It was his wife, we recall, who suggested, “Curse God and die.”

A bigger and more troubling question raised by Job’s episode is well known: why does a good God allow good people to go through evil times?  What was God’s agenda in allowing Satan to create such havoc in Job’s family and personal life?

Let’s let God speak for himself.  The problem God raised with Job in 40:6-14 is striking: it confronted human pride.  And rightly so.  Job, we know, complained about God’s handling of his welfare and reputation throughout the book.  He was certain he had done nothing to account for his suffering: God alone could account for it.  And Job wanted God to give him that account—an explanation of the misalignment between Job’s ordinary faults and God’s extraordinary provision of pain.

God’s broader response to Job in chapters 38-39 set up God’s particular agenda.  What is it, God asked Job, that you bring to your presumed courtroom as you challenge my judgments?  What do you know, for instance, about creation?  Can you explain the operations of the heavens and the earth?  What can you tell me about the living creatures I made to inhabit the earth—about how they live and succeed in their unique settings?  To be a faultfinder with God you first need to set out your own credentials.

Job was silenced by God’s challenge: he lacked any of the qualities God offers.  And that opened the door to God’s real concern: that ever since Adam first sought to “be like God” every human maintains at least some ambition to play God.  Every complaint we offer ultimately assumes either a major or minor premise of our own deity: our right to determine what is good and evil.  Yet God claims that “all things” belong to him—even the realm of his enemy—and that in everything he is at work for good among all who love him and are engaged in his purposes.

God then confronted Job’s presumed status as a judge of divinity: “Will you even put me in the wrong?  Will you condemn me that you may be in the right?” (Job 40:8).

But God’s purpose, we find, was not just to chasten an already humbled Job.  In his grace he set out a bigger picture.  He disclosed his purpose for the creation in the period between Adam’s fall and the coming of a new and sinless re-Creation: for our present era.  His work is to winnow the humble from the proud—to separate those who repent in the face of the true God from those who are irredeemably committed to their own standing as gods.  Listen to God’s own mission as he sets it out to Job:

“Look on everyone who is proud and bring him low and tread down the wicked where they stand” (40:12).  If Job can fulfill that task—of turning stone-like hearts into hearts that delight in God’s love—“Then will I also acknowledge to you that your own right hand can save you.”

Job’s story offers us a picture of a God who, in mercy, invites us to give thanks in everything.  It was a painful journey for Job, yet he arrived in good order.  And each of us is invited to do the same.

5 Responses to God’s Agenda in Job