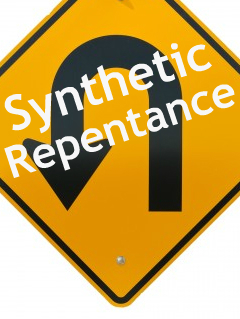 This week’s post is from Huw Williams.  The issue of repentance is of vital importance in all aspects of gospel ministry, and in this post he probes the problematic issue of faking repentance.  Huw was part of Cor Deo in 2011, is now pastoring the International Church of Torino, Italy, and will be co-leading the Bible Teacher’s Network with Peter at this year’s European Leadership Forum.  Huw’s blog is well worth a read – click here to visit.  Over to Huw . . .

Preparing a sermon in Luke 3 this week, I’ve been intrigued by a few features of Luke’s account of John the Baptist’s ministry. Luke tells us that John was “preaching a baptism of repentance for the forgiveness of sins.” Nothing so surprising there, prophets of God have always been advocating the turning to God with the change of heart which constitutes biblical repentance.

But the heart does not always welcome change, especially when faced with the prospect of relinquishing it’s own self-love. And so we see here in Luke 3 two of the great universal responses to the great invitation of God – self-justifying religious orthodoxy and synthetic repentance:-

“Produce fruit in keeping with repentance. And do not begin to say to yourselves, ‘We have Abraham as our father.’”

If God had called us to salvation through financial donation, religious ritual, or moralistic living, most of us would have found that form of self-justification far more palatable than humbly accepting an outrageously generous offer of relationship with Him. There is something about the hard-heartedness of sin that objects so strongly to the relationship on offer in the gospel that will do anything, anything to squirm out of it.

And so the hard heart desperately looks around for another way. Perhaps we can appeal to our claims of religion or Christian family heritage. Or perhaps we can trick God by mechanically “saying sorry” with such regularity that He will be fooled by our synthesis of a heart which has humbly and truly accepted His gracious love in true repentance.

I feel at least two real challenges here. Firstly, I think in my own teaching that I am far better (and bolder) at refuting the claims of the religious, than those of the synthetic repenter. Of course we’re not called to be constantly making judgement calls as to who is a true, and who is a false believer, and neither are we to ‘challenge’ with such sledgehammer dynamics that we obliterate the bruised reed. But at the same time, doesn’t John’s challenge to produce identifiable “fruit in keeping with repentance” remain?

Secondly, even with that challenge ringing in our ears, don’t we all feel that tendency to hard-heartedness gnawing away at us sometimes? And where do we go with it? Are we aware of what our own shots at self-justification or synthetic repentance look like? And what help can we draw from this text? Well, where does John direct us? To the one who will come after him (v15-18), he who who takes centre stage just a couple of verses later, and with the vision of such glorious Trinitarian love and delight which will always warm the coldest of hearts, with the help of the same Holy Spirit.

God’s Agenda in Job
His Benefits