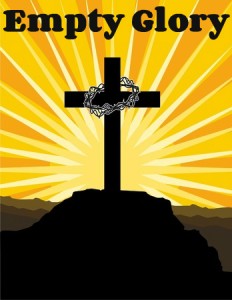 “Hosanna! Blessed is he who comes in the name of the Lord, even the King of Israel!” was the cry of the large crowd who heard that Jesus was coming to the feast in Jerusalem.   There was no doubt what they thought of him, he was representing Yahweh, the promised king who would save Israel.

But their mindset of what all this meant was turned on its head.  Jesus in John 12 said, “the hour has come that the Son of Man (who was given by the Ancient of Days glory and authority over all creation) to be glorified.”  But this glory isn’t the glory they were expecting, it was the time where he would lose his life and be lifted up on the cross, so that he might draw all people to himself.  That is, the glory of God was seen with the Son of Man dead, naked on the cross.

Now this didn’t go well with their expectations, how could this possibly be?  The Son of Man was to have power, dominion; the Christ was to live forever.  The idea that glory could be connected to death was absolutely impossible. Death is weakness and defeat.  It didn’t compute, and even the disciples didn’t understand Jesus until he was glorified.

This doesn’t usually sit well with us either.  How could glory be connected to the humiliating cross? How could this be the hour that God is most clearly revealed?

There are many reasons for this, but let me offer two.  First, we tend to make glory about power, strength, dominion, pageantry, and a majestic brightness. Second, we see humility as weak, low in status and condition, and modest in spirit.  Yet, God doesn’t seem to define humility or glory exactly like that.  Don’t get me wrong, there are elements of these ideas in the Bible, but at mountain peak moments in the Bible these two words are dramatically redefined.

John 12 is one of these mountaintop moments, and Philippians 2 is another.  Paul defines humility as “counting others more significant than yourselves.  Let each of you look not only to his own interests, but also to the interests of others.” After his instruction he offers the greatest example of humility by describing God’s humility.   Now we are all fairly comfortable with Jesus’ humility, but it’s the Triune God’s humility on display.

You might object: how could it possibly be about God’s humility when the hymn ends with all tongues confessing and knees bowing to Jesus because “Jesus Christ is Lord, to the glory of God the Father”?

That’s a great and perfect question to ask.   We see that God the Father exalts Jesus by giving him the name that is above all names.  That name is Yahweh, and all that goes with that name is synonymous with the name Jesus of Nazareth. Yes the God who said, “I am Yahweh and there is no other” and “every knee shall bow, every tongue shall swear allegiance” (Isaiah 45:19, 23), has equated himself with Jesus of Nazareth, the poor, unnoticeable, suffering servant, who died as a criminal.  Yahweh’s glory was displayed with death, even death on the cross.

Most importantly we see the ethos of the Father-Son-Spirit revealed by Christ on the cross. The glory they had before the creation of the world.  The Father delighting in and giving to his Son; the Son responding to his Father with the same other-centeredness; with the Spirit as the Uniter of the two.   The Triune God is humble, he isn’t self-concerned but elevates the other above himself.

Therefore, elevating self isn’t godly, nor is it glorious (Prov. 25:27). Jesus similarly states that “If I glorify myself, my glory is nothing” in the context where the Father glorifies the Son and Son glorifies the Father (John 8).  There’s no self-seeking in God’s glory.

So what should our response be to Christ’s gospel?

Paul invites the Philippians to live out the attitude of Christ, to humbly esteem others more than themselves, which will unite them as one body.   This isn’t a pragmatic suggestion, but an ontological reality for any person who is one with Christ.  The heartbeat of the Trinity is the heartbeat we have in Christ, a selfless love for the other.

Therefore, Paul would say, do nothing out of competiveness or conceit, which contradicts the mindset of Christ.  I think we get that competiveness, seeking to be better than someone else, will lead to fissures in a community.  But maybe we miss the contrast between God’s nature and a conceited community.   Conceited could be translated as “vainglory” or even “empty-glory.”  In other words, if you are focused on what satisfies self, over and against someone’s interests, you lack the character of godly glory.  God’s love humbly looks to the other, anything else lacks glory.

Jonathan Edwards says this better than most in his Treatise on Grace, “God’s love is primarily to himself, and his infinite delight is in himself, that is, in the Father and the Son loving and delighting in each other.”  Without the last section Edwards would be describing a God who only thought of himself and would be empty of biblical glory.  Instead we see a God who has existed since before the creation of the world in a selfless and giving ethos that Edwards invites us to worship.

May we gaze upon and know God’s glory that shines out by his humble character displayed for all to see on the cross.

Where Should We Start?
Three Versions of Divine Marriage

One Response to Empty Glory