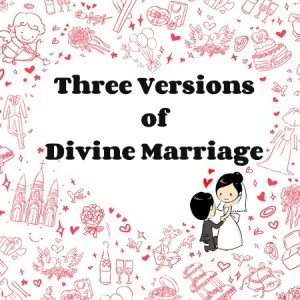 The Bible’s favourite analogy for the relationship between God and His people is marriage.  We have certainly mentioned this before on this site.  God’s great plan is to call out a bride for His Son from a fallen and sinful humanity.  God’s great promise throughout the Bible is that you shall be my people, and I will be your God.

It is a beautiful image.  I want to ask, though, what image comes to mind when we consider the Christianity we are presented with and experience?  I want to offer three human level pictures to highlight the variety of versions of Christianity:

1. The Legal Marriage.  In this version of marriage, the focus is on the legal status.  She was given an opportunity to trade in her problematic past for a new name, a new status, and a new set of benefits.  Her past debts were wiped when she said, “I do.”  She really appreciates all that her spouse did for her back then, and she tends to look back to the beginning of the arrangement.  On anniversaries and perhaps many other times during the year, she looks fondly at the marriage certificate and remembers her status change.

Legally she is his and she is thankful.  She spends her days trying to follow his instructions and she looks forward to the day when he returns from his business trip (he is working on a building project for now).  When he returns she hopes he is satisfied with how she has performed in his absence.

2. The Mythical “Marriage.”  This shouldn’t really be called a marriage, more of a chase.  There is this absolutely perfect and amazing being out there and I am chasing.  It is a bit like the Bible has hinted at a possibility, and others have spoken much of the offer of a blind date with a supermodel of a God.

So I chase.  I know that if I can just find the right conditions, if I can just get myself into the right state, then maybe, well, there will be this connection.  It will be so amazing I won’t be able to describe it to you.  I don’t know if it will happen, but I will chase hard.  In fact, I may end up pretending there have been some mini-encounters just to fit in with others who are chasing the same mythical mystical union, but who hint at more success in their quest.

3. The Beautiful Marriage.  Two people met and he pursued her heart.  She knew she wasn’t deserving or beautiful, but she became convinced of his love for her.  She found herself trusting him more and more, loving because she was first loved, and responding with delight at his proposal that they spend the rest of their lives together.  Legally their union transformed her status, removing her debts, giving her a new name and identity.  But her gaze is not on the marriage certificate.  Her gaze is on her husband.  Her ears and heart are always open to hear his heart speaking through his words.

It isn’t just her status that is changed.  She is changed.  As the years pass she becomes more and more beautiful.  It doesn’t seem to be that he loves her because she is beautiful, but that she is more beautiful because he loves her.  There are “firework” moments of connection, but they are like the icing on a good cake, they aren’t the whole thing and they aren’t the focus of a constant chase.  A lot of the marriage is spent in the nitty-gritty realities of daily living, of companionship and conversation, of living through the tough times together, as well as the good times.  It truly is a beautiful marriage.

So What? God made marriage a picture of his relationship with his people, a picture for the world to see and be drawn toward.  But does God want the world to be pondering all three types described here?  Is it any surprise that the enemy seems to work to fill the world with people chasing the elusive experience for the pseudo-marriage of a mythical ideal union?  Is it any surprise that many marriages are corrupted into a purely legal status change that lacks any real intimacy, union or relationship?

It is the beautiful marriage that God is both using as his illustration and offering us in his Son.  Legal?  Of course.  Ecstatic?  Perhaps at times.  But profoundly relational, hearts bonded, shared lives, intimate by communication at the heart level, united by the Spirit into a wonderful oneness.  Think about what human marriage could be and should be, then consider the implications for what Christian faith could be and should be.  I am my beloved’s and he is mine – what a delightful privilege!

Empty Glory
What do you think?