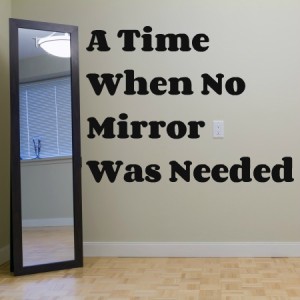 Have you ever stopped to think about the underlying motivations for looking in the mirror everyday?

Maybe you haven’t, it’s just a pragmatic moment in the morning to make sure your hair looks right and you don’t have anything stuck in your teeth so you look appropriate for work or whatever. But even as I wrote that with the intention to walk a fine line around the motivational conundrum of a mirror, I couldn’t escape the real ambition for looking in a mirror. Me.

It doesn’t necessarily have to be narcissistic. But to look appropriate for a particular occasion isn’t solely for other people either, really it’s about being accepted in a particular occasion. Maybe at my wedding I wanted to look great for my wife-to-be as she did for me, but I can’t help but think I wanted to look good for me too. That is, having other people tell me I look smart or handsome. I’m confident that this isn’t just my problem; we are motivated by performance of some kind. Whether it is looks, success, job, or whatever concoction you prefer, we are all tainted by the me-motivation.

For those of my friends who might be worried where this blog might be going, I’m not going to go stop looking in the mirror in order to get ready for the day. I wouldn’t want people to be tortured by the smell or the disheveled look that this would cause. I can’t imagine many people wanting to learn from me or listen to what I have to say in such a state. It would be a mountainous distraction to say the least. But maybe instead of reflecting about what others may think of me, I could use that time to reflect on and look forward to the bigger picture. A time when there was or will be no need for a mirror.

Just imagine what life was like for Adam and Eve in the Garden. They were naked and unashamed. They had no reason to look at self; they were completely satisfied with the other. They had the Life of God in them. They enjoyed walking with their God together, the One who generously gave them everything they could possibly ever need or want. They were content.

At this moment, a mirror wouldn’t make any sense. There was no need to look to self for anything with a me-motivation. Adam had the eyes of his heart fixed on God and Eve, and in return Eve had the eyes of her heart captured by Adam and God. As Augustine would say, this reality was the “substance of God” in them. The unifying presence of the Spirit directed their hearts to the other. Therefore they didn’t want to look at self and were happy with that! They were naked and unashamed!

So what went wrong?

In Genesis 3, just after the climatic conclusion to the creation account we find the “crafty” serpent approached Eve with a skeptical question about God and his provision. “Did God actually say, ‘You shall not eat of any tree in the garden’?” Now for Eve this was a no brainer kind of a question. She knew that God hadn’t been holding back, she had been given everything she would ever need or want. Not even for a nanosecond had she thought that something was missing. God had given her and Adam the fruit of every tree to eat from . . . except one.

I think this was the point the serpent was getting at. He needed Eve to quickly fix the blatant mistake of the serpent’s question while hiding the subtle one. Eve responded by correcting him, “We may eat of the fruit of the trees in the garden . . .” and then looking to the one tree Adam had told Eve God didn’t want them to eat from, she followed up, “God said, ‘You shall not eat of the fruit of the tree in the midst of the garden, neither shall you touch it, lest you die.’ ” Prior to this, Adam and Eve had no desire to focus on the one tree they couldn’t eat from. They were satisfied in everything else God had given them and they had no reason or desire to distrust God. No to mention, the word “death” was merely a word with no meaning for them. They were happily naked and unashamed.

When the serpent got Eve to look at the tree of knowledge of good and evil, he returned to his skepticism of God’s character.   The serpent enticed Eve with the idea that God was holding out, there was something that she needed that God hadn’t provided. God didn’t want her to be like God (even though she with Adam was the “image of God”). I think when she ignored the prompting of the Holy Spirit, saw the fruit of the tree as good for food and a delight to the eyes, the Spirit was grieved and left her. The fall took place with a simple skeptical look! And Adam gladly joined in.

Here the age of the mirror began. As the substance of God left them, their vacuous hearts curved in on themselves. The Spirit of God was replaced with concupiscence; the lustful desire for self and to violate any prohibition.

Now living in the age of the mirror we can’t fully get away from wanting to make sure our fig leaf is covering our physical and spiritual nakedness. Even with the Spirit living in our hearts, we still live in the time of a broken world and the flesh of Adam.

And there’s the battle, even at the mirror in the morning brushing your teeth. Are you looking forward to the time where a mirror will no longer be needed or do you still want to cover your nakedness?

I can’t wait to live for Christ and others without the gravity of flesh fighting against the Spirit of God who resides in my heart and unites me to Christ.   Where everything is new, where there are no tears, and Christ is there walking with us. Except this time our naiveté will be gone. We will know what death is. What it’s like not to trust God. What it’s like living in the age of a mirror. Praise God, we’ll never want to go back!

One Response to A Time When No Mirror Was Needed