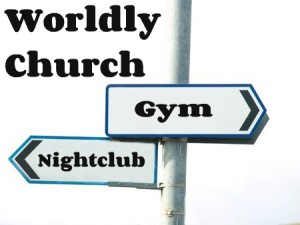 On a normal street in a town near somewhere, there is a church.  I won’t describe the building in any detail because this may cause you to either disassociate yourself from it and start pointing the finger at others, or to feel like I am pointing my finger at your type of church.  Let’s just say it is a church not unlike yours or mine.

The church building sits between two other buildings.  As you come out of the doors, to the left, there is a nightclub.  The building is unused most of the week, but everyone knows what it is and what happens there a couple of evenings each week.

To the right of the church, there is a gym.  It is a nice, clean, modern, glass-fronted building.  It is clear what happens in there.  Day and night rows of men and women strive to be a better them.  Treadmills and cross-trainers and rowing machines in rows are often half-filled with people trying to compensate for overfilling during the Christmas season.

As you look at it, there is the gym, the church and the nightclub.  Like many churches, the conversation over the years has included concern over worldliness creeping into the church.  At various points there have been discussions, sometimes quiet and in gossipy-tones, other times vociferous and contentious.  Some of the discussions have included whether choruses are appropriate or a worldly compromise, whether amplified music is appropriate in a church, whether people should dress up in their Sunday best in order to attend, whether it is appropriate to dance during worship, etc.  Some have even suggested having the nightclub so close might be an attack of the enemy.

As the conversations have gone on over the years, everyone has been aware of the danger of “turning left” out of the church and moving in the direction of the nightclub.  It has become a figure of speech for some in the church.  Others have pointed out that actually the nightclub may be a venue where bad things happen, but the church should be trying to reach the people in the nightclub, rather than fearing some sort of worldliness by osmosis.

Whether paralysed by fear, or eager to engage, everyone in the church knows that worldliness involves turning left out of the church door.  Or does it?

What if a preacher were to be preaching through Colossians and come to the end of chapter 2?  After all the tremendous material about the person and work of Christ, the One who is the very mystery of God embodied.  After the wonderful exhortation to walk in Christ in the same way as he was received, then the warnings about not being captured by worldly philosophy and empty deceit.  After the description of his victorious death and its open triumph over the forces of evil, finally the preacher gets to the latter verses of chapter 2.

Here Paul warns them of the dangers of religious asceticism with all its regulations and limitations.  “Do not handle, Do not taste, Do not touch.”  Then comes verse 23: “These have indeed an appearance of wisdom in promoting self-made religion and asceticism and severity to the body, but they are of no value in stopping the indulgence of the flesh.”

How can Paul talk about such things and refer to this as being worldly?  With Christ they died to “the elemental spirits of the world” and now, as if they “were still alive in the world,” they are submitting to such regulations.

What if the preacher pointed out that worldliness doesn’t only move in one direction?  What if turning right out of the door were equally a picture of worldliness for the church?  In fact, perhaps turning right is the bigger danger?

After all, one could argue that many church folks would find the nightclub unattractive for a host of spiritual, personal, and cultural reasons.  But what about the gym?  Striving to be a better me.  Working hard to achieve my goals.  Doing what it takes to look better in front of others.  Making the effort to overcome my comfort preferences to do the right thing.  Am I describing the gym or church?

If we are not careful, our churches can have a lot in common with gyms.  Environments framed in language of determination and effort (compare and contrast the self-determination commitment language of many sermons), sometimes places where personal image becomes more important than genuine vulnerability, even a programme that people endure despite their personal comfort preferences for the good that it will do for them.

We must beware of a simplistic understanding of worldliness.  In the parable presented here, the nightclub and the gym are both pictures of ways the church can shift from the focus.

One way is to move toward pleasure seeking.  The other direction is toward prideful striving.  Call it the younger brother option and the older brother option if you like.  Either way, the focus is always on me.  But Paul underlines that there is no value to be found in looking to me for the solution to the problem of me.

Instead, let’s be sure our churches are communities with hearts set on Christ, who is our life.  Let’s together seek to wear his character and not the garb of our worldly nature…either sort.

History is Devotional
Where Should We Start?

One Response to Worldly Church