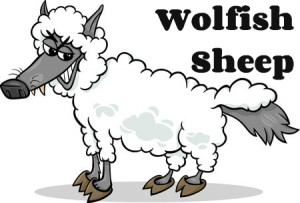 Paul’s heart-wrenching farewell speech to the Ephesian elders (Acts 20) had to have been a life-marking moment never to be forgotten. With tears in their eyes and lumps in their throats, they carefully listened to Paul’s pleas for them to be prepared for fierce wolves that would attempt to ravage their flock.

I am sure that if the Ephesians were like most elders in the church today they would have been shocked to hear of wolves coming from within the flock—wolfish sheep. Typically people in our churches (leaders or not) believe wolfish behavior is a danger from outside of the church. It is easier to assume that this predator, who is totally other, will come from a foreign place to destroy the faith with strange and foreign “gospels.”

While the outside-wolf is dangerous and has been present throughout the story of the church, the most consistent and dangerous threat to the church is from wolfish sheep. The church consistently produces heretics who bend the words of the Gospel. Often their goals are not to destroy the flock, but to “twist things” that they may gain a following.

The danger of these wolfish sheep is the subtlety of their message. Just a twist here or an addition there, and they can absolutely destroy the whole council of God. Yet these deformities are so small the counterfeit is overlooked and it is appealing, which often leads to a mass following.

What do I mean? Well just as there’s little belief that a wolf can come from within, it’s also assumed, “If there’s any false teaching going around in the church
(broadly speaking), it can’t be in my tradition.” We assume our tradition is free from these “twisted gospels.” But I’d say if it could happen with the Apostles (Galatians 2:11-14) and the early church, then it can surely happen even to the most biblically devoted of churches.

Why is this? Well, I would point to our sinful flesh. We, by nature, posses a gravitational pull that leads us away from the Gospel. We falsely believe that we are autonomous beings created to be responsible choosers. So therefore any teaching that puts the burden on our back, especially in the sense of becoming godly and meriting reward, will draw us quickly toward it. It’s natural, it makes sense, and therefore many traditions are marred by the subtle twists and worldly passions that appeal to our flesh.

Before I say more let me offer a biblical example of these wolfish sheep. Judaizers, or the circumcision party, were a major problem for the early church. This heresy that Paul addresses repeatedly in his letters (Galatians, Romans, Titus, Colossians, just to name a few) taught that keeping the whole Law had a central role in the life of the believer. That is, they believed we are justified by faith through the death and resurrection of Jesus, but for our justification to be complete, we are made righteous or sanctified by our individual effort to obey the Law. This was a gospel twist that Paul insisted must be “rebuked sharply” (Titus 1:13) because it doesn’t correspond to the Gospel revealed in Christ and received by the Spirit. Rather, the addition of the Law to the Christian life is to follow the “elemental spirits of the world” (Col. 2:20ff), to “deny God” (Titus 1:16), to be bewitched (Gal. 3:1), and to sever yourself from Christ (Gal 5:4).

In other words, to look to our own effort by following ascetic rules or regulations of “do not handle, do not touch” are indulgences of the flesh and remove you from Christ. Paul said in Titus 1:10-16, that the people who would teach these things are “insubordinate, empty talkers, and deceivers”, who are “defiled and unbelieving”, and therefore in desperate need of correction. Consequently, anyone who teaches that keeping the Law is a means to being sanctified not only destroys the Law and the Gospel, but also must be silenced for the protection of the church and for the salvation of their very souls.

Calvin said it better in his Institutes, “Attention to one’s own righteousness also nullifies the promises.” See, if faith is “a firm and certain knowledge of God’s benevolence toward us, founded upon the truth of the freely given promises in Christ, both revealed to our minds and sealed upon our hearts through the Holy Spirit,” then anything directing us away from this is disbelief.

Here is where it gets serious. How often to you think that you have to make yourself right for God to like you? How often to you think that you can make yourself more spiritual by some discipline, listening to a sermon, or reading your Bible? We have a wolfish heart that tells us that we must do something to make God love us more or for us to become better people. This is no different that the Judiazers that Paul chastises throughout Galatians.

We truly can’t do anything apart from God! It’s not that we are empowered to keep the Law by God. Rather, Christ purchased the very life and good for us on the cross that we might have the promised Spirit (Gal. 3:10-14). If anything draws us away from complete dependency on the Spirit, from walking by the Spirit, being led by the Spirit, and having the Spirit produce fruit in us, then it’s another message and it’s not from heaven.

Life in Christ continues just how it started, looking to Christ for life through the Spirit, by faith. Directing our gaze, building our righteousness, or easing our anxieties by keeping any rule or Law, instead of living by faith in God’s promise that we have life in Christ, is not the Gospel.   Paul states it so much better:

For through the law I died to the law, so that I might live to God. I have been crucified with Christ. It is no longer I who live, but Christ who lives in me. And the life I now live in the flesh I live by faith in the Son of God, who loved me and gave himself for me.   I do not nullify the grace of God, for if righteousness were through the law, then Christ died for no purpose. (Gal 2:19-20)

May we follow the true teacher, and not the wolfish desires of our flesh, nor even the non-gospels often taught in our churches.