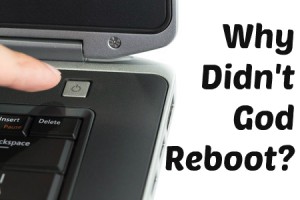 I recently upgraded the operating system on my computer. Frustratingly I now have a computer that freezes periodically. The only solution appears to be reaching for the power button for an enforced reboot.

God created humanity and soon saw them corrupted by sin. It was not gradual. We read of the fall into sin in Genesis chapter 3. As soon as sin entered the story we see Adam and Eve hiding and protecting themselves, and when confronted they continued that pattern by blaming each other, and for Adam, even blaming God for what had happened.

In the next chapter we read of one of their sons murdering his brother. Sin’s influence was immediate, and it was devastating to humanity. We were created for loving fellowship with God and with each other. But God watched as humanity spread like cancer across the globe, destructively devouring every opportunity to love in an insatiable quest for self-promotion. The loving God created a world quickly filled with hate.

It is not that God didn’t have the power to reboot. He spoke everything into existence by the power of his word, so he could just as easily wipe and begin again. He did wipe the planet with the flood, and yet saved sinners through that to continue the same race that had pushed the boundaries of sin in the first place.

It is not that God wasn’t concerned about sin. He hates sin and its devastating effects on his creation. He hates death in all its forms – physical and spiritual.

So why didn’t he reboot creation, and especially humanity?

The two biggest questions we can ever face are central to understanding this question. First, which god is God, or, what is God like? Second, what does it mean to be made in his image, or, what is a human?

If we were to tour the god options on planet earth we would find an amazing consistency. Most of the god options on display are gods defined by their power or desire for control. In many ways they tend to be, as Feuerbach put it, “projection of our own ego onto the clouds.” That is, the gods of the humans tend to be bigger and better versions of humanity – specifically, fallen humanity. Since our life in a fallen world is marked by self-promotion and the desire to control our circumstances and our rivals, so the same must be true of God (or so we tend to think).

Yet the God of the Bible continues to surprise us if we are looking for a fallen and competitive human magnified into divinity. Instead we find a God who is other-focused, a God who gives and gives. He is a God who is prepared to give not only of his abundance, but of himself.

That is all good, but why didn’t God reboot a fallen and rebellious creation?

First, because God knew that humanity created in his image would always explore the realm of not loving God. Since true love can never be forced, the exploration of the forbidden fruit would always have a certain strange attraction to creatures made with creative and inquisitive natures. So God could reboot, but then it would all happen again. But this doesn’t mean that God was somehow stuck with a badly designed creation that was fatally flawed forever.

The second, and main, reason that God didn’t reboot is because he already had a plan. Before the foundation of the world God knew what it would take to have a world inhabited by creatures joining in the loving fellowship of the Trinity. He knew it would take more than an impressive creation.

God is God and we are not. That truth was challenged by the lie of the serpent in the garden. Humanity was offered a rival god-like status and we grabbed it with one bite. God was saddened, but not surprised. He had a plan.

God’s right to be God and to rule according to his nature has been challenged for thousands of years. Perhaps the greatest challenge is humanity’s counterfeit god-complex by which we act as if we are gods. We play god when we corrupt God’s loving creation into a self-loving and self-serving realm. Then without thinking we project a power-hungry, glory-grabbing, self-serving mindset onto the clouds and say that God is just like us.

With billions of people living the lie, surely God is outvoted and his great plan is defeated? Surely hell laughs in derision? Actually, no. God is God and we are not. God is like God and not like the fallen us. God remains loving and giving and generous and kind. And most astonishingly, God doesn’t need to reboot in order to fix the fallenness of humanity.

In the Gospel we discover that God had a plan. We can explore the darkest recesses of rebellion and hatred toward God. We can live the lie with the resources of the world at our disposal. But we can never turn the lie into truth. God is God, we are not, and His intention still holds true. God will have a creation filled with humans who feely love Him and each other, sharing in the eternal delight of Trinitarian fellowship.

Before the foundation of the world God had planned to give of himself for our sake. He planned to send His Son to die in our place and so startle us with the entirely different character of God that he would win our hearts from the apparently unbreakable power of self-love. When Jesus died on the cross he paid the penalty for our sin, but more than that, he revealed the true glory of the true God, and so is drawing sinful self-absorbed mini-gods back into fellowship with the true God. God will share his glory with no other god-rival, but he will share the glory of his love with us who are his!

The serpent, and every human, and all the forces of hell have given everything to defeat God’s great plan for creation. We have all failed. One day everyone will know they have failed. One day every knee will bow. And in that day they will look on the bride of Christ in amazement. God planned to bring a vast number of humans into the loving fellowship of the Trinity. And that is exactly what he is doing!

God did not need to reboot creation. God had a plan that was not dependent on original creation, but on his great plan of redemption. God had a better plan.

Can We Stop Saying…?
A Secret Society?