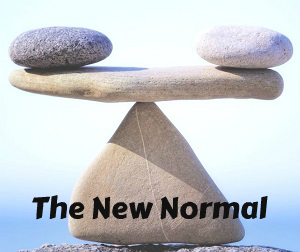 Everyone assumes their perspective is a healthy and balanced one.  If we can see one person off in one direction, and another off in the other, we must be the one holding the privileged position of balance.  But maybe we need to take an often-overlooked factor into account.

Ever since Genesis 3, humanity has been pickled in the brine of “like-God-ness.”  It saturates every stitch of our being, and quietly, but consistently, pushes us toward positions of pride.  Even as believers in the true God, we still live in these bodies, which with the world and the enemy, constantly push the false view of God and what it is to be like Him.

As a result we will typically tend to view ourselves as impartial and somehow capable of adjudicating “healthy balance” based on our own perspective.  But how small our perspective can be at times.

A few years ago I met with a man who leads a nationwide ministry.  He made a comment that stood out to me.  He said that a century ago, the ministry he works for was considered middle of the road and mainstream evangelical.  Now it is considered to be holding an extreme position.  But, he noted, “we haven’t moved at all, the road has moved.”

I was recently driving with one eye on the Sat Nav / GPS.  Suddenly my car was half off the road, at least according to the little screen.  If I had assumed that the little screen cannot lie, then perhaps I would have been tempted to drive with two wheels over the verge of the road.  That would have been bumpy and strange feeling, but eventually that could become normal.

Imagine if all the little screens were consistently off by a few feet, and that drivers consistently drove with two wheels off the road.  Eventually it would become the new normal.  They might sell slanted booster seats to support the lower passenger and enable a more comfortable position for all.  They might sell two types of tyre for each vehicle – the dirt tyre and the road tyre.  Eventually lampposts would be moved and pedestrians would learn not to walk within three feet of the kerb.

How long would it take for the on-road/off-road approach to become normal?  Not too long if everyone did it.  Then along comes someone with a more complete perspective.  Perhaps someone who dares to challenge the little screen wisdom, someone who has studied the history of motoring, someone who has not read the older driving books with filters to only see what is currently normal.  How would that person be viewed?  Imbalanced.  Dangerous.  Obviously a bad driver.

How often this has happened in the history of the church.  Not so much with Christian driving habits, but with church practice and perspective.  For a relatively brief season, a church or denomination becomes narrowly focused on one perspective of some issue.  That issue may not be simply practice, polity or issues of preference – it could be the nature of the gospel itself!  Finally when someone dares to challenge it, they are considered dangerous and imbalanced.

“We don’t appreciate your emphasis on road surface driving.  Before they invented roads all you could drive on was loose stones and dirt.  Your “four wheels on man-made surface” talk is imbalanced and is lacking the rough and tumble of two wheels on, and two wheels off.  People are guaranteed to crash if everyone tries this new emphasis.”

This kind of “new normal” is something all of us are prone to fall into.  How can we combat it?  A few quick suggestions:

1. Continually remember that God is God and I am not, and I am happy with that arrangement.  When we start acting as if we know all we need to know to make decisions about things, we are slipping toward the Genesis 3 God-like-ness again.

2. Recognise the flaw in assuming balance is always right.  This has been unchallenged wisdom for close to a millennium now, but there are issues to be found with a pursuit of balance.  As I sometimes put it, my wife feeds our children healthy food, but she never balances salad with bleach.  Truth mixed with error is not balance.

3. Devour the Bible.  Don’t just jump to your favourite proof texts, but read the Bible as a whole and listen as God continues to reveal Himself to you and teach you with gentle relevance to the situations you face today.

4. Be a reader.  I don’t mean just reading books that fit within your set of preferences.  Read widely.  And read outside of the current generation.  Often perspective from the past can shine a light on the narrowness of today.  We enjoyed two days of Luther last week at Cor Deo – he is worth reading substantially rather than just in soundbites!

5. Break out of the bubble.  It is easy to live in a little bubble of one type of church, one culture, one perspective.  If we have opportunity to see something else, let’s take advantage.

Well-traveled, well-read, biblically saturated, teachable and humble . . . and still we will tend toward driving with two wheels in the dirt.  What would you add to this list?

The Dictator Within
Experiencing God