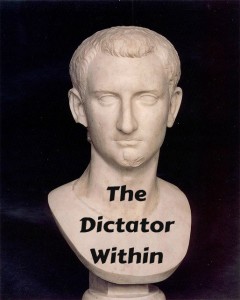 The Bible tells us that God opposes the proud, but gives grace to the humble.  So what do we do?  Typically we tell ourselves to act humbly until we are truly humble.  But this seems to highlight the problem, namely, our pride.  How prideful it is to think that we can, by our own volition, make ourselves humble. Yet this problem goes deeper than our thinking processes.  Our inner response mechanism is impossible to manage and incredibly subtle – it always prompts us to assume we must start to act humble in order to become humble.  Even if God is enabling that choice, we still tend to see ourselves as the instigator of the preferred attitude. We will always tend towards a quid pro quo relationship with God – as if we must earn the reward of grace by making ourselves humble.

The Problem: our inner Caligula.  Ok, you might say I don’t have some despotic, insane, emperor that thinks he’s God living inside me.  Are you sure?  We were created as heart-centered beings, lovers meant to be in an other-centered loving relationship with the Triune God who loves to communicate and share his goodness.  Our hearts always determine what we do.  So the question is whether or not our hearts want God, and therefore they are good? Or do our hearts want to be God, and therefore they are evil, or could I say, insane?

When Adam and Eve rejected God’s love and mistrusted his word, they became like the serpent whom they trusted: one who is an independent, self-loving, hater of God.  This new disposition became their dictator, and, as their progeny, our inner evil dictator too. As a being that wants to live as an autonomous agent, our hearts misshape reality as we see fit and determine what we want to be good or evil.

We do what we want: Like it or not, recognize it or not, we all have an inner Caligula.  The third Emperor of Rome shortly after becoming princeps went mad and started spending the Empire’s fortune so wildly that a financial crisis ensued. For instance, he ordered a two-mile floating bridge to be built in order to prove that his late uncle’s friend was wrong. This friend had said that Caligula had a better chance of riding a horse across the Bay of Baiae than becoming Emperor.  Well, after becoming Emperor, Caligula had no choice but to prove him wrong, regardless of cost.

What does this first-century madman have anything to do with anything?

Our hearts and actions are no different.  Our affections dictate to our minds (the processor of our wants) and to our wills (the chooser of our wants), and they merely carry out the commands of the dictator–no matter how crazy.  We make everyday decisions from our wants, like deciding to have coffee or tea, or coming up with rational reasons to buy the car we can’t afford.  Our hearts merely state what we want and expect their minions to make it happen (Matthew 15:10-20, Mark 7:14-23).

We think what we want:  But the despot’s power doesn’t end there.  Think of the many advisors and wise people who surround people of power, including Mr. Little-Boots (Caligula). A wise, open minded leader usually has people in their privy council or cabinet that have values in opposition to his or her values so that fully informed decisions may be made. But not in the case for madmen like Caligula, Kim Jong-Un, or our hearts, they have advisors and agents that tell them what they want to hear.  These advisors are instruments that take news, logic, etc. and color it in order for it to fit into the reality of the dictator’s desires.   So, our minds will take logic and information, then twist it to fit with the reality that our hearts wants to be true.

Let’s go back to the verse in James mentioned above, “God opposes the proud but gives grace to the humble.”  It is our minds that take this text out of its context and immediately make it an application action point in order to receive our earned reward.  Again, the mind is only following the orders of the proud heart, which desperately wants to be autonomous and responsible for its rewards.  The text is actually about the inner disposition of our hearts and clearly states that if we love the world we are enemies of God, and to be proud is to be a lover of the world and a hater of God.  Only by responding to God’s love and being his friend, and the world’s enemy, will we be like God.  But this is missed when our hearts rationalize texts like this one and make it “about me, and my effort.”

The solution: a new and greater dictator. Again, you might be thinking, “we don’t need a new dictator, we need to get rid of the dictator entirely by ignoring our hearts, then we can start listening to our minds.”  Well, this doesn’t work and will never work since we are heart-centered beings, and again it’s a prideful way of taking control of a reality we can’t control.  It’s amazing how hardened we are by the deceitfulness of sin! What we need is a new dictator with a greater affection for Christ than our mad affection for ourselves.  Praise God for His promise, “I will give them a new . . .”