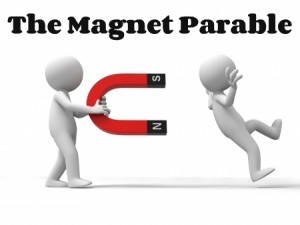 Let me offer a magnet parable.

A man bought an industrial grade mobile magnet—a smaller version of what one sees in the auto crushing business.  He was proud of himself for being both noble and practical. He was noble because he planned to use the device to clean up his town.  It was practical because the soda and beer cans he planned to collect all had value: each included a small deposit in the purchase price that could be refunded once it was returned.

With his magnet the man was certain that he could collect hundreds of cans in the time it took others to collect them one at a time.  He also knew of a number of littered roadways and overflowing trash bins that were certain to generate quick cash.

But it didn’t work!  As he drove around with the magnet head hung out over the side of his truck all it ever attracted were bits of scrap—leftover fragments from auto accidents, screws and bolts, nails and wires—but not a single beer can. This was an absolute mystery because he made sure to let the magnet hover over the conspicuous cans.  But even then they never moved!

Finally it dawned on him that the magnet wasn’t strong enough: he needed an upgrade.  The problem, however, was his cash flow.  It had taken all his spare money to buy the first system so any upgrades would have to wait.  Next then, in order to rebuild his cash reserve, he adopted a new approach: adding heavy-duty glue to the face of the magnet.

Before long he put out his sticky-glue-swabbed-magnet and it worked.  Wherever he found cans by the road he pulled his levers in the truck to manoeuvre the magnet over the can and lowered it until he made contact and the aluminium can was his!

The modification had its drawbacks, though.  For one, it wasn’t easy to remove the cans from the magnet because of the glue—they all needed to be done by hand, one-by-one.  And, even more, he had to pull off the grass, mud, plastics, and ceramics that the glue also collected.  And then the recycling stores didn’t welcome the sticky cans!  So it wasn’t long before the mucky magnet was sold on eBay—at a huge loss—and the project came to an unhappy end.

A question, of course, is why the man ever thought magnets would attract aluminium—the stuff such cans are made of—since magnets only attract the ferrous metals like iron and steel.

You also might be wondering, why such a nonsensical parable?

Here’s why.  Because God has given us a similar principle: he will be attractive to some people but not to all.  And we can’t tell beforehand who will be drawn to him and who won’t be, but the difference can be discovered in time by the principle of spiritual attraction.

The principle is made explicit in John 8 and 17—to name just two spots—so that we know that God’s word is attractive to those who will join his eternal family.  In fact there’s a sorting process going on right now: his teaching is attracting God’s family but not everyone finds that family attractive.  So when Christ’s words are offered in a given setting some will respond like a steel bolt drawn to a magnet, but others won’t be stirred in the slightest.

The attraction is God’s love.  In John 8:31 Jesus said as much to a group of erstwhile disciples.  The basis of true discipleship is a spiritual kinship birthed by God’s work in hearts—a point made in John 3 and elsewhere.

In John 17 Jesus spoke to the Father with the same principle in mind: Jesus offered the word the Father sent him to share and it produced two opposite responses.  Some came to him and believed; but others hated him and his disciples.  “I have given them your word [speaking of the disciples] and the world hated them because they are not of the world, just as I am not of the world” (17:16).

What was Christ’s aim in offering his divisive word—a word that attracts some and not others?  To identify those in the world who love him: “that the love with which you have loved me may be in them, and I in them” (17:26).

What, then, can we take from our parable?

This much at least: some churches today have replaced Christ’s word with swathes of attractive activities and it seems to work.  Lots of people can be collected.

But what defines such churches?  A love for Christ and for neighbours?  Or a love for the lively enjoyments being offered?  From our gospel principle we learn that the latter—those who aren’t captured by Christ’s love as expressed in his word—are being collected for all the wrong reasons.

So let’s get out the divine magnet of God’s love as revealed in his word and see what happens.  I predict that the glue-covered folks won’t be impressed, but the real children of God will leap to the source and clamour for more.  Try it and see!

3 Responses to The Magnet Parable