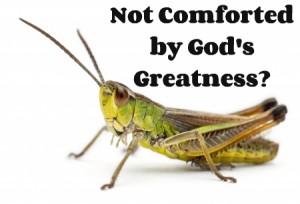 God is strong enough to handle whatever challenge you or I might be facing.  I think most of us readily believe that.  And yet His great strength sometimes is not the comfort we think it should be.  Why?

Seven centuries before Christ, Judah was facing disaster.  King Hezekiah had welcomed envoys from a little city-state to his little nation and had tried to make his little nation look big to them.  But he left God out of the treasury tour.  So Isaiah informed him that that little city-state would become a major force in global affairs and little Judah would be carried away into exile by them.

Hezekiah didn’t seem to care, because it would happen after his own lifetime.  But those with a heart would have cared deeply.  This was disastrous news: away from the land of blessing, away from the place of promise, away from the temple, etc.  Devastating news.

Immediately God followed up with the wonderful comfort of chapter 40.  Like a good parent administering major discipline, God immediately leaned in and offered loving comfort.  Their sins were paid for, the return from exile was already being predicted, every eye would see the glory of God’s loving delivery of His people, indeed, His Word could be trusted above everything else in creation.

Then comes verse 9.  The capital of the nation, Jerusalem, that should be reeling in shock at the coming disaster, will one day puff out its chest, stand tall and declare to all the cities around, “Behold your God!”  The exilic return will ultimately result in God Himself reigning as shepherd-king from that very city.  This was a powerful image of hope, and also a powerful instruction literarily as the message of comfort develops.

In this time of challenge and change, God’s people should fix their eyes on God Himself.

What follows for the rest of the chapter is largely focused on the greatness of God.  Twice, the text asks whom or what can God be compared with?  The incomparably great God of Isaiah 40 is the creator who rules, He is awesome in scope and in power.

First, He is greater than the nations (vv12-17).  God created the globe that the nations sit on, for even the great oceans are held in the palm of His hand and the great mountains are like dust on a scale.  Consequently the great nations are like a drop from a bucket.

Second, He is greater than the gods of the nations (vv18-20).  God can’t be compared to an idol, that is ridiculous.  A human makes the idol and then has to make sure it doesn’t fall over.  No comparison.

Third, God is greater than the most powerful people of the nations (vv21-26).  This is where the text feels most relevant to me.  I don’t lie awake pondering geo-politics and the strength of man-made gods.  If I do lie awake, then powerful people in my sphere are often key figures . . . an influential person in the family, or at work, or in the church.  But from God’s perspective, even the most powerful prince on the planet is nothing more than a little grasshopper, or even a blade of grass that sprouts and then is blown away.  Thus, from our perspective down here, how great is the God out there beyond the thousands of stars we can see who put them all there and calls them each by name?

The greatness of God is awe-inspiring!  Ponder the great oceans, the great mountains, the great starry hosts of the cosmos, and our God is greater, He is stronger, He is higher than any other.  No question.  But also, I think, no comfort.

In fact, it is not just me.  The prophet spotted the problem for the original hearers.  In verse 27 it is clear that Isaiah is not just portraying the greatness of God as a comfort to the people.  He makes a key link.  Their circumstances, like ours, caused them to doubt God’s care and attention.  After all, if the princes are like grasshoppers, what about little me?  God has a cosmos to look after, why would I matter to Him?

Why?  Because this is the LORD.  Yahweh, the God who makes promises and keeps them, the God who puts Himself into covenant with people and declares “I will be their God and they will be my people!”

This God created everything and yet is not tired.  He is strong and His strength is given to those who have no more strength.  It isn’t the super-human abilities of the elite soldier or hand-picked athlete that measure ultimate strength, it is the self-giving of the strong God who gives Himself to those that wait on Him.

This is so important that Isaiah doesn’t just end the passage by focusing our thoughts there.  He begins the passage that way, too.  Back in verses 10 and 11, before launching into the stunning portrait of God’s supreme power, we are given a heart-stirring glimpse of God’s heart.  The most powerful, bulging muscle, ruling arm is described in verse 10. Yet this arm has the fruit of His labour with him, the people He cares for as a shepherd are right there. Isaiah gets explicit: He gathers His people like lambs, He carries them close to His beating heart, He gently leads those frail ones who have just birthed their young.  What a picture of God’s tender strength!

Let me encourage you, as I encourage myself: in challenging times of change, let’s fix our eyes on the graciousness of God’s greatness.

Curl up with Isaiah 40 and pray that you might feel the beating heart of God as He carries you, and perhaps even the nail-pierced hands of the shepherd who became a lamb led to the slaughter to pay for our sins and make us His.  If you start in Isaiah 40, read it closely, and then keep going, I suspect you will find comfort in God’s greatness, after all.  The graciousness of God’s greatness.

Do Not Forget!
The Magnet Parable

3 Responses to Not Comforted by God’s greatness?