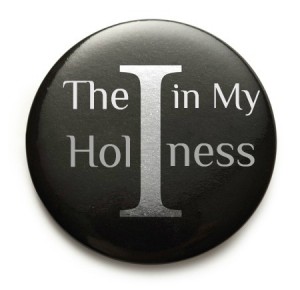 There’s a subtle and natural hiss in the conversation that surrounds the pursuit of holiness–that is, it becomes inevitably centered on the unholy-trinity of me, myself, and I.  The traditional rendition of the “pursuit for holiness” warrants my personal effort to behave righteously; and sanctification, therefore, has as its central quality a personal introspection and responsibility.

Naturally, even if one couches a holy life as inside-out, union with Christ, and the response to justification by faith alone, the discussion still revolves around outside behavior, visible sin, and the keeping of the Law.  Therefore, regardless of a commitment to the close connection of justification and sanctification, these two are separated into a gift and an obligatory effort. Sanctification becomes an autonomous effort, motivated by appreciation to God and empowered by enabling grace, to progress from one stage of holiness to the next.

The issue with this discussion, at a fundamental level, is an assumption that there’s consensus on the biblical understanding of the word “holiness.” What does it mean to be holy as God is holy? Typically you’ll find holiness defined by God’s transcendence and his difference from creation. “He is separate, distinct, not ordinary or common.” Therefore, somehow with his enablement we are to live as distinct, separate and uncommon people.

But what does this mean? And is this Biblical?

First, as fallen and self-consumed people we’ll project the qualities we value onto God and make them grander and “perfect.”  So, as we delight in our glory above anything else, God too must also be consumed with his glory.  As we are motivated to be the top dog, God’s primary concern is to have his omnipotence and authority recognized by his creation through obedience to his Law and ascribing to him glory.   Holiness, consequently, is God valuing the glory and power of his Name above anything and we must join him in this godly introspection.  So while justification imparts to us forgiveness from our sins and the ability by the Spirit to become obedient once again, it is  our job to give the required effort in aligning ourselves to God’s holiness, obeying the Law and ascribing glory to God.

To answer the second part of my question, this is not biblical!  While one could, of course, offer proof texts to prove the Aristotelian list of god’s attributes (elevation of power as primary, God as a naval-gazer, and glory-grabber), the God of the Bible doesn’t reveal himself as this at all.

Actually, just thinking of Philippians 2, Psalm 113, Isaiah 53, well, actually the whole Bible, we find a God who reveals himself as one who is outward-looking, self-giving, humble, and whose name is Emmanuel.  God describes his glory or the goodness of his character in Exodus 34:6-7:

The LORD, the LORD, a God merciful and gracious, slow to anger, and abounding in steadfast love and faithfulness, keeping steadfast love for thousands, forgiving iniquity and transgression and sin . . .

God is patient, merciful, loving, and seeks justice (a very loving thing to do). The rest of the Bible uses this passage as a primary source to define the character of God.  Such character finds its culmination in John 12; here Jesus reveals his Father and the character of the Triune God dead and naked on the cross. Why the cross you ask? So that the glory Jesus had with the Father before creation of the world would be given to us.  That is the glory of the Father loving the Son and the Son loving the Father by the Holy Spirit.  Christ in us and us in Him, just as He is in the Father and the Father is in Him (see John 17).

What is holiness?  It’s the label for mutual indwelling of the Father and Son by the Spirit.  The Father humbly loving his Son above all, and the Son loving his Father above himself and his concerns.

So what does it mean to be holy as our Triune God is holy? To be separate and distinct from the unclean: selfish, glory-grabbing, power-hungry human beings.  Holiness is to be united to Christ by the Spirit given to us who pours God’s love into our hearts.  To be holy is not to look at self, but to have the gaze of our hearts fixed on the loveliness of our Savior, our friend.  It is to call our Bridegroom’s Father, Abba!

If you walk away reading anything on holiness and find yourself thinking about self rather than one who is holy, may I suggest that there might be a few missing letters in your h _ _ i _ _ ss.  Because sin is an all-consuming self-focus.  Any pursuit of holiness that returns us to gaze on self only makes us more like the Enemy than Christ.

Sanctification is the process of an ever growing and ever deepening love for Christ.  It’s not the individual endeavor to fight off sin with the enablement given by the Spirit (like a tool we now get to use for ourselves).  Nor is it just looking back to the moment Christ saved us.  It’s going from glory to ever increasing glory (in the Exodus 34, John 12 & 17, 2 Cor. 3 sense). As we cling to Christ by the Spirit with all that we have, and as our hearts warm by the fiery coals of his love, then we will freely, delightfully, and naturally be holy as He is holy.