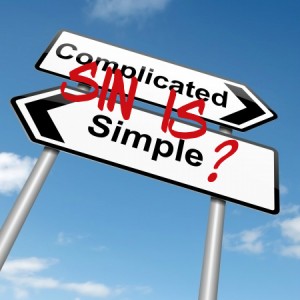 Sin is simple, or is it?  Everyone assumes they know what sin is.  It is what bad people do, or what normal people do if they are being bad.  Sin is about breaking laws and hurting others and stealing and being unethical.  But is sin that simple?

Consider the story of the Prodigal Son in Luke 15.  There you have one of the best-known stories of the Bible.  One man, two sons, and what a story!  The contrast is obvious between the boys.  One is bad, the other is good.  The younger goes away and lives the brief life of squandering wealth in a far country, while the older one stays home and gets on with the family business.

There are obviously differences, but perhaps we would do well to ponder what they have in common.  They are much more alike than most of us realize.

They were both seekers.  The younger brother came home seeking to be a paid servant in the home of someone he knew would pay more than a room-only wage.  The older brother was also seeking something from the same man.

Both wanted relationships elsewhere.  It was friends over family for these two.  The younger brother wanted to be a servant, which meant living away from the home and perhaps building up the necessary wealth to leave again.  The older son wanted at least a goat so that he could celebrate, not with his family, but with his friends.

Both viewed their father as a boss, a benefactor by contract, but not an Abba.  The younger planned to ask for a job.  The older son referenced his work and the lack of appropriate pay.

Until we grasp that both sons were sinners and lost, we are in a very dangerous place.  Where is the danger?  The danger lies in the misunderstanding of sin.  If we think of sin only as covenant breaking and lawlessness, then we will only see the younger brother as a sinner.  His Las Vegas / Amsterdam-weekend lifestyle certainly reeks of the sin we tend to recognize as sin.  But what if sin goes deeper than extravagant licentiousness?

There is one difference that is clear between the two.  As the story ends, one of the brothers is in the home, accepted, loved, and fully alive to relationship with his Abba.  However, the other is still stood outside, face like flint, refusing to accept his father’s attempt to rescue him by self-humiliation as he begs him to come in.  The humility of the father melted the heart of the younger son, but there is no hint the older one will allow himself to be won over.

That’s the danger of not grasping the real depth of sin.  What if sin is actually about rejection of real relationship with the father?  What if sin is birthed out of self-absorption and self-rule?  What if sin is about the heart and consequently can manifest in different ways?  The sinful heart loves itself and makes itself out to be god, and does not want God to be god.

We are in a dangerous place if we think sin is always manifested in certain ways.  We could spend our whole lives being very self-righteous and religious and avoiding all overt rebellion.  Yet we would be as lost as the obvious sinner.  His rebellion and self-love is demonstrated in gross behaviour, but ours can be masked in great behaviour.

How many in the church are working their way to respect and acclaim in this life, only to face a lost eternity because they always saw God as one who owed them something in return for their “goodness,” but never accepted His self-humiliation to melt and win their hearts into the fullness of life found only in his embrace?

3 Responses to Sin is Simple?