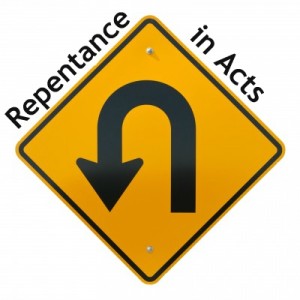 I was recently preaching from Paul’s missionary journeys in Acts.  As I was working with one of the passages I was struck by Paul’s use of the term “repent/repentance.”  Since this is such a critical term biblically, I decided to study all the uses of the terms in Acts.

In the Old Testament prophets, the verb “to turn” is used many many times.  Their call was for the people of Israel or Judah to turn from their alliances with other nations, from their self-reliance, from their unfaithfulness to the covenant and to turn back to God.  But what of the term in Acts?

This kind of study is always fruitful.  The methodology is straightforward:

(1) You begin by finding every use of the original term, since a partial study can always be swayed by a selective personal bias.  I won’t refer to the Greek terms here, although that is what I mean by the original term.  In this case I recognized that there is an associated term as well.  As well as to repent (verb) and repentance (noun), there is also the verb to turn used with significant overlap.

(2) Once you have all the uses, then you can look at each one in its context and see how it is being used.  I took notes in a chart that had a column for notes on what the turn or repentance was From, and what it was To.

(3) Having looked at each usage in its own context, then you can compare and see if there is any pattern or consistency.  This kind of word study could be called doing biblical theology of repentance/turning in the book of Acts.  Was there anything to note?  Absolutely.

The term repent or repentance is used eleven times in Acts.  The term turn is used in the same spiritual sense a further eight times (as well as some less relevant uses when describing the physical action of a person turning around – although there is consistency there, as will be shown).

So with all that methodological introduction out of the way, what do we find?  As ever with this kind of study, the process is very enlightening.

There is great variety in contexts, from Peter preaching in Jerusalem, Peter & John responding to the Sanhedrin, and Peter reporting to the church on Gentile conversion, to Paul preaching in a synagogue to Jews, in Athens to philosophers, at Miletus to a gathering of church elders, and in his final trial in the book.  Once you look at the term to turn, the dispersion of uses is even more complete – James at the Jerusalem Council, Paul to the Jews in Rome in the last chapter, etc.

There are surprisingly few references to sins in the From column.  Actually the repentance was largely about turning from a relational rejection of God.  For example in chapter 3, Peter refers to the fact that they had delivered Jesus over, denied the Holy and Righteous One, killed the Author of Life, etc.  In Athens Paul’s critique was not of the fruit of their sin (i.e. behaviours), but of their ignorance and making god in their own image.  Twice John the Baptist’s message is referred to, but again, repentance is used to point to a relational issue – the need to turn to or believe in the One coming after him.

While it is necessary to dig around in the context to ascertain what should go in the “Repent From” column, the “To” column is even more striking.

Ten out of eleven uses are clearly pointing to a turn to a person.  Sin of rejection and sins of behaviour are forgiven in the turn, but the turn is to God.  It is not to right behaviour.  Paul in Athens, for instance, doesn’t call them to turn from bad behaviour to good behaviour.  He calls them to turn from a wrong view of God to instead seek God and find God.  Repentance is a relational turn from darkness to light.  Almost half of the time, it is connected with receiving the Holy Spirit – again a highly relational concept in terms of salvation, for the Spirit is the promised gift from God, who bonds believers to God by a relational union.

Ten out of eleven implies one exception.  There is.  In 26:20, Paul is on trial and in his presentation of repentance he offers a cluster of both terms.  In the context of the relational turn from darkness to light, from the power of Satan to God, etc., he also includes the fruit of that relational turn: performing deeds in keeping with repentance.

A quick look at the use of “turn” in the salvation/gospel context shows another eight uses that are all relational turns – that is, a turn to the Lord, to God.

Repentance in Acts is a thrilling study.  Seeing lives transformed always is.  But let’s be careful to see what is actually written, rather than imposing an alternative view.  When someone turns from sins to live a better life, that may be a good thing.  But the gospel as seen in Acts is not about God-empowered resolutions as rebels become religious in their behaviours.

The gospel in Acts, as seen in a study of repent/repentance/turn, is radical relational transformation as God-haters/rejecters turn to Him and become part of the fellowship of God’s people, united by God’s Spirit, to Christ.  And the fruit of that turn has transformed the world!

The Problem with Jesus
Praise the LORD!

5 Responses to Repentance in Acts