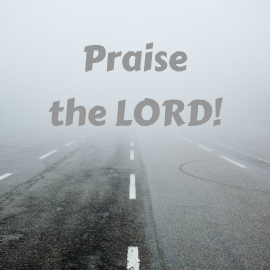 The translation of the familiar command “hallelujah” can often fall on dead ears, even for those that clearly love God and love to praise him.  Aren’t there times in our lives when worshiping God, not just in song but in all aspects of our lives, just doesn’t seem all that appetizing?  And if we just see the command to praise the LORD as an outward duty, then we may just go through the motions of “worship.” So, when we are in a pit of despair, what is the answer?

I’ve thought these moments in life are similar to driving on a narrow, windy road on a foggy day.  You know those drives where it’s so foggy you can’t see beyond the hood (or bonnet for my British friends) of your car.   All you want to do is stop, but you can’t because there might be another car coming from behind that won’t see you, but you are also frustrated because you need to be where you are going and want to go faster.  In this vortex of conflicting desires you slowly drive along, hands vice gripped to the wheel, as you stare at the white line on the road.

In the fog of life’s circumstances and the often-conflicting desires we have, we can’t see our ultimate destination, our good God. As heart-centered people we can’t force ourselves to not have these desires. But the truth is that we can’t just go through the motions of worship: God is not impressed with outward performance, but about why we do what we do. Faking praise and worship doesn’t really work, actually God in Isaiah 1:14 says this kind of worship burdens him.

Well it’s interesting what the psalmists do in a situation like this, they either ask God for a clearer view of him, or they offer a clearer view of him. They seem to think that the warmth of God’s character could burn away the fog that we may see him more clearly.  If we could just get our eyes off the fog and place our gaze on the light of the sun so that the fog would just disappear.

Psalm 113 is one example of this call to worship aided with a warming view God.  It begins with a call to all worshipers to praise the name or character of the LORD, to praise his character for all eternity, and in all places of the earth.  But the psalmist doesn’t stop there, he gives details of God’s character that will naturally lead to praise.

The description begins with a declaration that Yahweh is above all powers and authorities. He is the most powerful and above all creation. The psalmist asks, “Who is like Yahweh our God?”  No one and no god is like him, no god has the power, the majesty of our God.  You can begin to see the fog fade way, yet this description of Yahweh isn’t complete, there’s more.  If it did stop at that moment, the all-powerful God is actually no different than any other god.

And to be honest, if we’re facing the loss of a loved one or some of the darker moments of life, God’s power isn’t all that comforting in itself.  He’s in control but isn’t doing anything about it. Does he really care? Or is Yahweh like other gods, so distant and so consumed with himself that I need to work out my own issues to appease Him?

NO! The psalmist would answer, Yahweh in all his power and strength humbles himself to look upon and care for his creation (113:6).  The word translated by the NASB as “humbles” is used in other places to describe God dragging the proud and mighty down to the place of humiliation and abasement.  The psalmist calls us to worship Yahweh who abases himself so that he can take the lowly and lift them up to the place of nobility. God goes down and out for the social outcast so that they might dwell among the princes of his people.  Yahweh isn’t some God who sits on high and doesn’t care, but a God who leaves his place above the heavens to make the pauper a princess.

What’s even more thrilling is that this picture of God’s humility still isn’t the clearest glimpse, there’s more.  Jews sing this psalm before the Passover meal and its very likely that Jesus led the disciples in singing this song the night he was arrested.  That night when he would be accused and convicted of crimes he did not commit. And later the next day he would be humiliated and cursed, dead and naked, on the cross. The God on high, the one born in obscurity, the one who was called an illegitimate son (John 8:41), abased himself to lift up the lowly to the highest place of honor.  Jesus did not hold on to equality with his Father, but went to the darkest of pits for his enemies so that we may dwell with him on his throne.

Repentance in Acts
The Saving Spirit