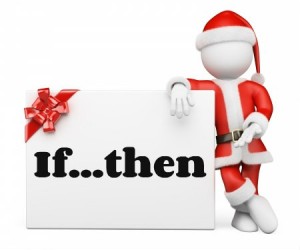 I noticed something in Job I hadn’t seen before.  Job’s erstwhile friends all used an “if . . . then” approach to confront Job over his presumed sins.  The point was simple: If you change your behaviors, Job, God will reward you.  If not, then God will punish you.  Very clear and very confrontive.

This strategy of rebuke began with Bildad in chapter 8: “If you will seek God and . . . if you are pure and upright, surely then he will rouse himself for you . . .”  Zophar adopted the same approach in chapter 11.  Eliphaz gave it a try in chapter 22.

They were wrong but we need to look more closely at the story to see why.

Behind their moral exhortations was another premise: that serious loss or suffering is a certain indicator of continuing sin in one’s life.  This in turn set up a formula for engaging God: he rewards everyone who behaves; and he punishes all who misbehave.  It’s a quid pro quo—cause and effect—arrangement that everyone needs to understand and apply.

We know, of course, not to dismiss the point that God does, indeed, judge sin.  In Deuteronomy 27-28, for instance, God set out two possible trajectories before Israel: one promised blessings and the other led to disasters.  The Bible says as much from start to finish as Jesus himself made clear: no one can serve two masters—God and the world—but will love one or the other.  Yet this polarity can’t be reduced into the one-for-one packaging that Job’s friends were using.

In fact, at the end of the book God himself said as much to the three useless advisors, “My anger is aroused against the three of you, for what you said about me wasn’t right, while Job spoke properly” (42:7).

This may surprise us because in the prior verse Job had just confessed his own fault, “I despise myself and repent in dust and ashes.”  Something in Job had been corrected, but it wasn’t the same sort of error God attributed to his three companions.  So what were the separate issues?  What did Job miss?  And what did the companions get wrong?

Let’s consider the second of these first.  Throughout the book Job’s dismissal of his friends’ counsel was based on three certainties.  First, he acknowledged that every person is guilty of sin at some level so that a divine pattern of tit-for-tat punishments for particular sins would be obvious if this was truly God’s plan.  Second, based on the cause-and-effect formula of his friends, nothing Job had done could account for his extraordinary sufferings.  And, finally, he knew that we all know of a host of truly wicked people who have completed their lives without ever facing Job-like sufferings.

Job saw the issues his friends missed.  He even adopted the “if . . . then” premise of his friends in a final dismissal of what they were claiming.  This is seen in chapter 31 when Job offers more than a dozen “If I have [ever] . . . then [let me be punished accordingly]” assertions.  In this defence he covers a variety of human faults that his companions apparently had been presuming against him.

Job thus reversed their premise of circumstantial guilt with his own testimony that he was righteous even in using their implied behavioural standards.  That finally quieted them—no one could prove Job guilty on any score—even if they remained unconvinced.

Job, on the other hand, was guilty of thinking that God was obliged to defend his moral reputation.  Job’s grumble was that a divine courtroom was needed in order to show his skeptical human companions that he was not a perpetrator of great evil: “my eye pours out tears to God, that he would argue the case of a man with God, as a son of man does with his neighbour” (16:20-21; see, too, 23:1-7).  The Trinitarian overtones in Job are remarkable as he looks for God to represent him before God—something also suggested in 19:21-27.

So when God confronts Job at the end of the book he takes up Job’s reputation-centred issue, a concern that began to blur Job’s other certainty that God always does what is right.  Job, now confronted by God himself, quickly agreed that he had been presumptuous!

Now let’s return to the “if . . . then” thread that runs through the book.  Are we in league with Job’s flawed companions?  Or do we stand with Job?  The question is important in light of the moralistic tendencies found in current evangelical faith.

What do I mean?

Just this.  If we think of God as a supernatural Santa who is urgently tracking whether we’re naughty or nice we’ve fallen into the moralist trap.  It’s a trap because it makes God out to be a pliable and unworthy figure—a supernatural resource we get to use to our own ends—as we seek to manipulate him by our behaviours.  If we behave well his “tit-for-tat” duty is to bless us.  And with that our “faith” is actually a confidence in our own behaviours as we think—like Job’s companions did—that we create our own goodness, a goodness that God is obliged to reward.

God wants our hearts, not our good works.  When we open our hearts to him, he makes us good, and not the other way round.  And Job was truly a good man—a man of faith—but in the episode reported in this book his faith was only met with Satan-defined suffering.

Thank you, Job, for being such a fine example of authentic faith for us!