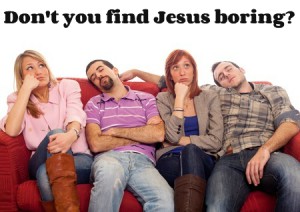 Boredom. It can set in for all different kinds of reasons. I remember as a kid, it was usually because what had previously entertained me became predictable. Overuse (or abuse) of that entertainment meant that playing video games, shooting hoops, watching TV, riding my bike, etc., began to grow stale.   Somehow, in some way, I had exhausted the excitement of that object to the point that I became hopelessly bored.

With no desire to get into all the cures for boredom for kids, I want to ponder why many who call themselves Christians get bored with Jesus.

You might say, I’ve never been bored with Jesus, how could you say such a thing?

Well, let me answer with a couple questions that I think the vast majority of us can relate to. Have you ever struggled to read your Bible? Have you ever found sport, TV, video games, your job, or whatever, easier to engage than have a conversation with God in his word? I’m assuming you could easily have experienced this at least once in your life, if not consistently. And maybe one of the reasons for this is that your relationship with Jesus has become flat from “overexposure.”

Again maybe you’ve never said this out loud but maybe you’ve believed the unspoken voice that you know everything there is to know about Jesus. That somehow you’ve exhausted all that can be known of Jesus in the Bible.

Maybe you grew up in church listening to the same stories every Sunday. Perhaps you had a Christian education from kindergarten to post-grad. Maybe you have heard and even taught all the stories about Jesus. Jesus is boring to you because he’s predictable: you know what he’s going to say or do next. It is as if your heart says, “Yep, Jesus always seems to heal the sick, love ‘the-wrong-kind-of-people,’ and offend ‘the-right-kind-of-people.’ ”

Or what about the feeling that you’ve heard the “Gospel” a thousand times so that now it has grown stale? Again, maybe you never say this, but in your heart you’ve thought, “How many more times do I have to see or hear about Jesus building a cross-bridge over the gap between myself and God?” Maybe you feel that the “Gospel” is just a juridical get-out-of-eternal-torment card and not much else. And then we are supposed to autonomously self-generate a life of holiness and obedience by our gratitude for this paper-thin gospel.

Is this either the Jesus, or the Gospel, we find in Scripture?

What we find is a Jesus who’s utterly shocking and jaw-dropping astonishing.

In Mark 2:1-12, we find a familiar story for anyone who has spent any time in church at all. Jesus heals a paralytic who was lowered through a hole in roof of a home by four men because so many people were crowded in the house to hear Jesus teach that they couldn’t get the paralytic to him. It’s tragic that so many kids have been bored over and over with this amazing story and are taught that we must do whatever we can to get people to Jesus, primarily by bringing them to church.

But is this really the story or the application? I’d say no! Jesus actually is quite alien to those in the story. Not only does Jesus give of himself and teach people when he’d just returned from a road trip (how many of us would do this?), but he shocks everyone when he sees the faithfulness of the paralytic and his friends. He doesn’t heal him, the assumed greatest need of a man who couldn’t walk, but rather forgives his sins.

No one in that house was expecting Jesus to say, “Son, your sins are forgiven,” not one of them. This is where you can imagine wrinkled foreheads, raised eyebrows, jaws on the floor, and utter silence. They were there to hear Jesus teach with authority and see a miracle. Now with the first one out of the way (they might have thought), it was clear to them what Jesus would say when the paralytic had finally reached the floor, “Stand up and walk.” Instead he said, “Son, your sins are forgiven.”

Now, the scribes were starting to make connections in their minds. “Who does this guy think he is? Only God can forgive sins, right? Does this mean that Jesus is calling himself God? And if so, what do we need to do about it?” Jesus sensing this in his Spirit, meets the needs of the skeptics. He says, “So you can know that the Son of Man has authority from heaven to forgive sins on the earth” he turns to the paralytic and says “Rise up, take your bed, and go home.” It’s Jesus offering the tangible to prove the intangible.

I think most of us, if we had the authority of the Son of Man in Daniel 7, the last thing we’d do would be to prove our authority with meeting a need. Instead we would send the doubters away to be hung, drawn, and quartered. Jesus doesn’t do this. He meets the needs of the skeptics and the entire room is gob smacked! Then they give God praise as they watch the man stand up, pick up his bed and walk home.

So let me encourage you: if your relationship with Jesus has grown stale, flat and he seems predicable, then ask God to give you a deep sense of curiosity for him and for his Word. Challenge him to shock you. Plead with him to engage your deepest needs, needs you may not even know you have. Tell him you desire to find him more thrilling at any cost. I believe he’ll gladly answer and you’ll discover that the goodness of our God will never grow stale.

Heartfelt Knowledge
Sowing to the Spirit?

One Response to Don’t you find Jesus boring?