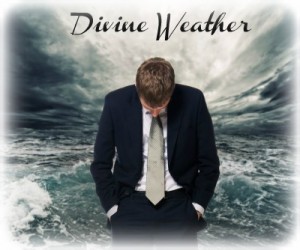 A quote in the Washington Post caught my attention.  As hurricane Sandy approached the American eastern seaboard a Washington DC resident remarked, “I emailed my preacher today and said we need a sermon on the wrath of God . . . the storm is coming.”

This wry comment in the face of daunting weather reports touches an important issue.  What role does God play in bringing about hurricanes, tornadoes, tsunamis, and the like?  Insurance companies call them “acts of God.”  Are they?

Yes.  The Bible regularly presents God as ruling all realms of nature, including weather. Think, for instance, of Noah’s flood in Genesis 7.  Or the Genesis 41 account of a seven-year famine in Joseph’s era.  There were also the three rainless years in Elijah’s time—in 1 Kings 17.  And the episode in Mark 4 when Jesus stilled the storm on the Sea of Galilee and his disciples marveled, “Who then is this, that even the wind and the sea obey him?”

But what can we do with this answer?  Outside the Bible God never explains why these things come along.  So if he wants us to learn something from natural disasters today, how would he let us know?  We don’t have any God-ordained spokesman—at least any we might trust—to tell us, “A storm [or earthquake, fire, tornado, fiery asteroid] will arrive one month from today to warn you about God’s view of your sins!”  That’s what Jonah did and it worked for Nineveh but it’s not something we’ve seen much since then.

The point is that any prophetic speaker needs to speak beforehand and in specific terms for listeners to give him any credence.  That’s different than in a case after Hurricane Katrina when a preacher claimed the storm was God’s judgment against New Orleans for her vices.  This after-the-fact claim sounded more like a mean-spirited “piling on” rather than a God-inspired message.  One might ask this would-be-prophet, among many other things, why New Orleans instead of so many other equally deserving cities?

A better response is to offer a tender heart and a giving spirit to care for any and all whose lives are shattered by a hurricane and its flooding.  God is rich with mercy and all of us who know him are called to share that mercy freely.

Yet there is another prospect to consider.  Can we as individuals come to God and ask him, “Lord, what can I learn about you through this disaster?  You’ve caught my attention: can you open the eyes of my heart to see you more clearly as the ruler of all nature?  Do I have some room to grow here in grasping what it means for you to be God?”

Some possible lessons come readily to mind.  For one: that no matter how strong and resourceful a given country might be, humility before God is still called for.  That when an election is taking place to select national leaders we should pause and say, “Oh mighty God, how then should we live in light of your much greater role as the ultimate ruler?”  And another: that storms will come and go, but if we step out to love others amid extraordinary hardships we then start to recover some extraordinary values.

So even as I write this I’m continuing to watch the news, praying for God’s mercy.  And I’m praying for many tens of thousands of people who would otherwise be preoccupied with their own mundane concerns to pause and say: “Oh my God, we need you!”

That’s a practical sort of repentance that might start a real national reform; and it would be a good topic for our Washington DC citizen to hear his pastor preach about this coming weekend.  God is always ready to answer the prayers of the humble, and a deep humility before God is a quality that too often needs some serious stirring.

Update #37
What Teaches Us?

One Response to Divine Weather