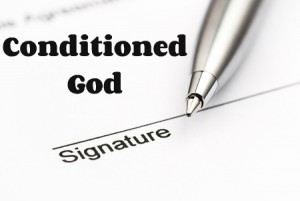 When I got married I received all kinds of “helpful hints” on how to have a healthy relationship. Clearly some were more helpful than others, but one in particular was more dangerous than anything else—marriage is about “give and take.” We’ve all heard this. Maybe we have come across reasons why it doesn’t work.

In the background of this ‘universal truth’ is the assumption that relationships are primarily contractual. That is, one party promises to provide certain benefits to the other on the basis that certain conditions are met. If either party doesn’t meet these defined conditions, then the contract—I mean “relationship”—is null and void and the deal can then be terminated. Give and take.

Shouldn’t marriage be about unconditional love? Doesn’t our culture yearn for authentic relationships with that foundation?

Well yes and yes but like the bad advice above, there’s a catch – we want to receive unconditional love but we don’t necessarily want to offer it. Because of Genesis 3 we function on the basis that relational covenant is a contract. We’re primarily concerned about what benefits we get and the conditions we need to meet to get what we want. So if someone doesn’t love us unconditionally, or make us happy, we don’t have to meet the conditions we promised.

What’s amazingly sad in all this is that humans actually want to relate to God this way as well.   We take God’s unconditional promises of covenant and turn them into conditional contracts. Think of Genesis 28, where Jacob leaves the land to escape his brother, Esau, and to get a wife who is not from the Canaanites. Before he leaves the land, God visits him in a dream. In the dream God promises Jacob the same promise that was given to his grandfather and father, which is characterized by the words “I will…” God unilaterally promises to bless Jacob, to be with him, and to bring him back to the land. And Jacob’s unbelieving response to God’s word is to turn the unconditional into a condition. “If God will be with me and keep his promises, then the LORD shall be my God.” Did you catch that? Jacob doesn’t believe God’s word but instead tells God that he has to prove it first.

Jacob isn’t the only one. Because of sin we all tend to morph any relationship into a contract with conditions. Often we project our fallenness onto God, expecting ourselves to prove our belief in him so that he might be gracious to us.

Therefore it shouldn’t be a surprise that theological systems do the same thing. For instance, in New England in the 17th century, Puritans found themselves differing on this very subject. John Cotton emphatically said that we passively receive God’s free grace and promise, but his colleagues said otherwise:

… But to take our first Assurance to arise from the Spirit in an absolute promise only, is not only difficult for us to believe (and therefore desire your grounds) but seems to maintain, as straightening the freeness of God’s Spirit in working and destroying the comfort of many, whom Christ himself doth speak comfort unto, Matthew 5.3. etc. only we add, That God’s free grace may be revealed and received as freely in a conditional (where the Condition is first wrought by Gods free grace and not trust to, as we desire ever to be understood when we mention conditional promises) as in an absolute promise. For it is grace that works the Condition, it is grace that reveals the Condition, it is grace that makes the promise, it is grace that set on the promise; and what danger is there hereby, to a well instructed Christian of going astray from free grace?

Could I be so bold as to answer Cotton’s colleagues with another question? Which God would require a condition (even if graciously provided) in an unconditional promise? Does God really need to be conditioned to be gracious to us?

Their answer does seem to attempt to ease the tension of a God who’s a walking contradiction. You know: a God who’s one thing BUT also another, as if God has attributes that are seemingly in conflict, but are both true of him. Like the response to the 11th question of the Heidelberg Catechism, “God is indeed merciful, but also just….”

This tension does not reflect the Triune nature of God who exists in mutual relationship. The reality is that God is love and greatly delights in himself – He is a Father loving his Son, and the Son loving his Father, by their Spirit. Therefore all his actions such as creation, redemption, judgment, etc. reflect his loving Triune nature.

The walking contradiction attempts to make biblical the Stoic notion that God is primarily the “Contract God” who can only relate in a conditional contract, or as a Lawgiver. For instance, you’ll find people seeing the prayer of John 17 as a God who relates to himself in a contractual deal. So the church is understood to be the reward for Jesus’ obedience to his Father so that Jesus can have a people to rule over. This is very different than seeing the loving Son going to win a people for his Father so that they may participate in the Family of God.

I think the only one who comes to that conclusion has a God who is a “give and take” God, or a contract God, rather than a covenant God. The whole story of God isn’t give and take; it’s rather a story of the Generous Giver. It’s about the One who pursues his people with “all his heart and all his soul” (Jer. 32:41). It’s about the Father who has given us his only Son that we might be his people and He our God. It’s about the Father who has given all that’s his to his Son, so that the Son may give all that he has to his bride.

Bottom line: the Bible isn’t the story of an a-relational God who cannot relate without a condition. He doesn’t require us to clean ourselves up so that we can then be united to Christ. Rather, we are united to Christ who makes us clean. Or in other words, a pauper isn’t required to make herself a princess that she might marry the prince, but rather the prince marries the pauper, which makes her a princess. It’s all about unconditional relationship and promise as the basis for covenant, not a conditional contract.

Quiet, Please!
Holy and Blameless Before Him

One Response to Conditioned God