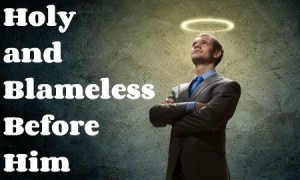 Typically we think that the solution to two extreme views will be a blending of the two. So in this case, is sanctification best understood as a cooperative effort where God does his bit, and I do my bit? I don’t think that will help us. Our flesh will corrupt that model. Instead, let’s ponder the big biblical framework for sanctification.

The Sin Problem – Let’s back up a bit. We have to grasp the depth of the problem before we can fathom the wonder of the solution. The core of the sin problem is not bad behavior or faulty thinking or a weakened will. The core of the sin problem is the lie that we can be “like God” – that is, like the false god who made the original offer. We believe that we can be autonomous and it is that self-orientation which drives and corrupts everything about us.

But God – We were dead in our sin, but God. We were living as dead folks in the realm of death, but God. God sent his Son to die for us, in our place, winning our hearts by pouring out his love into our hearts by the Spirit, and thus uniting us to Christ in a marital union. We are now one Spirit with Christ our bridegroom. We died with Christ. Our life is hidden with Christ. In Christ. Christ in me. Union. Marriage.

When we start to see how much marital union language there is in Scripture, it should start to purge us of the contractual approach we function with in this world so much – i.e. obey stipulations for the sake of gaining reward. But it is not easy to shake this idea, for our flesh will always pull us back in the direction of autonomy.

The danger of autonomy – So how do we see sanctification? In the context of a marital union the groom washes his bride by the washing with the water of the Word, that she should be holy and blameless before him, without spot or wrinkle. So he is proactive and at work in the bride to cleanse and transform her by the Spirit through whom the union exists.

As we read the epistles of Paul, for example, we can start to spot the union language that creates the ethos for the instructive elements . With Christ. In him. Christ in you. This is key to avoiding the danger of our autonomous impulses.

The opposite danger – This raises an issue though: if it is not about our self-moved effort, are we saying we are therefore totally passive? Some go that way. It is all of God, and what I do doesn’t matter because it is “all of God.” This can lead to either licentious living – a marriage marked by the bride going off after other lovers. Or it can lead to mere passivity – a marriage marked by the bride being totally unengaged in life.

Again, we need to bring to the fore the reality of our marital union with Christ. In being united to him we do not become puppets. Not autonomy, nor automatons. Christ doesn’t desire to be married to a mannequin.

Thus we have language of union to counter our tendency to self-made righteousness. And we have instruction and direction to counter the possibility of puppet-ness.

Is the bride engaged in life, active and alive? Never more so! Biblical sanctification anticipates an active engagement from us. And in the context of a fleshly inclination that has always dominated us, there is need for clarification of what it means to walk in a manner worthy of the spouse who has captured and won our hearts. But that instruction must never be corrupted into a self-driven autonomous obedience for the sake of reward . . . there is nothing of marital union in that thinking.

Two Ugly Wives – Some churches are characterized by an autonomous self-driven effort, a legalism and rule-based obedience for the sake of reward. Some churches are characterized by an unengaged laxity, a sinful sloppiness that treats the desires of the bridegroom as effectively irrelevant to the life of the bride. Both are ugly. The dutiful wife who works hard but is totally self-absorbed in her diligence to be seen as a good performer of wifely duties, and also the straying wife who cares little for what her husband desires and plays the harlot with other lovers, are both broken images of marriage.

The Glorious Bride – The biblical image of Christ’s sanctified bride is so glorious. She is captivated by Him, beautified by His love, actively engaged in a dynamic communion with him and living moment by moment for him, her gaze firmly fixed on the one who loved her first.

2 Responses to Holy and Blameless Before Him