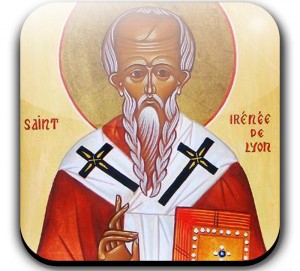 The early church father, Irenaeus, offered bread for hungry hearts.  Here’s something from him I find helpful in coming to a new year.  He wrote sometime around AD 180.

“God recapitulated in Himself the ancient formation of man, that He might kill sin, deprive death of its power, and vivify man” [Against Heresies, book 3.18.7, ANF].

His use of “God” here referred to Jesus, the divine Son.  The ministry of Jesus was to recapitulate—“to be a new head”—for humanity so that where Adam failed in the face of temptation, Jesus succeeded.  Where Adam embraced and followed Satan, Jesus defeated and dismissed him.  So the question for us this year is this: which “head” now leads us?

Here’s more of what Irenaeus had to say in making his case.

“[W]hen He [the Son] became incarnate, and was made man, He commenced afresh the long line of human beings, and furnished us, in a brief, comprehensive manner, with salvation; so that what we had lost in Adam—namely, to be according to the image and likeness of God—that we might recover in Christ Jesus” [3.18.1]

So the humanity of God, the Son, is the basis for “that fellowship which refers to Himself” because we now are in “communion” with him by our spiritual adoption.  This union with Christ allowed him to restore our once-dead-humanity by undoing Adam’s disaster and redoing it successfully through his earthly life: “Wherefore also He passed through every stage of life, restoring to all [stages] communion with God” [3.18.7].

We, then, are saved and transformed by faith in the Son whose life-work defeated death in a step-by-step march that began when he was birthed by God’s creative work of the Spirit in a virgin—as Adam, too, had been uniquely created by the Spirit’s work.  He then began to fulfill “all righteousness” [see Matthew 3:15-4:11 for a portrayal of Christ succeeding where Adam failed], until he completed his faithful work by dying, accursed, in our place on the cross, though he was sinless.  Then in his resurrection he trumped death with life.

How did Irenaeus come up with his salvation narrative?  He started with a face-value reading of Romans 5:12-21.  Let’s recall a couple of Paul’s main points in that chapter and then read it all when we next have a Bible in hand:

While “sin came into the world through one man, and death through sin,” so now, “much more will those who receive the abundance of grace and the free gift of righteousness reign in life through the one man Jesus Christ” (verses 12 & 17).

In salvation, then, we actually participate in Christ’s new and successful humanity as his Spirit pours out God’s life and love in our hearts (Romans 5:5).  And, as we read in Romans 8, at every moment we are invited to set our minds on the Spirit who reassures us that we are now forgiven and invited to approach God as “Abba”.  And with that, “we are more than conquerors through him who loved us” (Romans 8:27).

I only wish some of our more recent theologians could be as clear and helpful as our dear forefather Irenaeus was in his day.  But let’s now move on and let Irenaeus rest.

The question we can answer as we enter a new year is this: are we living in the grace and love Jesus offers us?  Are we looking to him as our true head and new way in all we do, with a heartfelt devotion so that as he looks back at us, he smiles with pleasure?

It’s a profound invitation in this new year.

Why So Humble?
Who Goes There?

One Response to A New Way