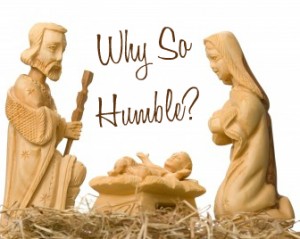 This week’s post is from Huw Williams.  Huw was part of Cor Deo in 2011, is now pastoring the International Church of Torino, Italy, and will be co-leading the Bible Teacher’s Network with Peter at this year’s European Leadership Forum.  Huw’s blog is well worth a read – click here to visit.  Over to Huw . . .

Like most of you I expect, I’ve been pondering the incarnation more than usual recently. As I have been preparing sermons in the birth narrative of Luke’s gospel, the question which hasn’t gone away for me is “why”? Why the son of an obscure Nazareth girl? Why the manger? Why this humblest of births for the Son of God coming into the world to save sinners?

Most of us would answer (quite rightly, I think) with ‘humility’. We see the humility of God as His Son lowers himself in the incarnation, as he enters the world without palaces, without fanfare and without all the ceremony which would have been his due. He starts his life as he means to go on, eschewing the trappings of fame, earthly power and the glory which comes from men and women.

Many of us would point (again quite correctly) to fulfilment of prophecy, especially passages like Isaiah 53 which tell us to expect a Messiah without the normal human currencies of influence – outward beauty, political power, and so on.

But I wonder if we can go a little deeper with this question, because while the above approaches an answer, it stops short of explaining the necessity of this humblest of royal births. And I wonder if there is a more affective answer to contemplate.

Consider this – why does the manner of Christ’s first and second advents differ so substantially in some key aspects? A comparison is instructive – in his first advent he came to earth in humility and without grasping at his equality with God (Phil 2:6), when he returns it will be with unmistakeable glory and undeniable authority. His incarnation heralded the great invitation to all who were thirsty to come and drink from him (John 7:37), while his return will be a moment too late to respond to that same invitation (Luke 13:22-30).

And yet if the manner of his first advent was more like that of his second, wouldn’t that have been easier? Easier for Jesus not to have to argue his authority at every turn, easier for us to believe he was who he said he was? If Christ’s first advent had been marked by the majesty of his second, then of course his authority would have been undeniable, and certainly every knee would have been bowed. But would hearts have been won?

God’s invitation to salvation and to relationship with Himself is one and the same. Many a tale has been told of a prince who has gone wooing his bride incognito, to know that she loved him not for his power, nor for his authority or glory or riches, but for who he is. Could it be that these stories are merely the echoes of – and our yearnings for – The Great Story, of The Great Prince who comes to woo his bride with glory veiled, but with the wide open heart of God clearly in view? Sharing in the glory and the splendour and the authority and the riches of the Prince is certainly the privilege of His bride, but she does not love them for themselves, but rather the beauty of the person to whom they belong.

2 Responses to Why So Humble?