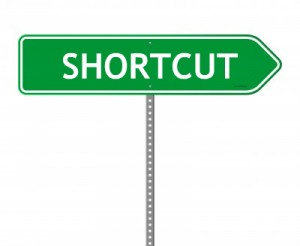 Everyone likes a shortcut.  Less travel, less time, less effort.  But not every shortcut is a good shortcut.  In fact, there is a very popular shortcut that fails in two ways: it does not take you where you want to go, and it does take you somewhere you don’t want to be.

A shortcut to the wrong end of a one-way street.

Imagine there is a street with three important buildings on it.  At the far end of the street is a very significant looking building, bustling with activity and lots going on.  This is no mean place, and in fact, the town is known for what happens here.  Over the door is a bright neon sign flashing “Action Centre.”  The towns around know the town because of the “Action Centre.”  It is the centre of the town’s communications, journalism, media and so much more.

Further along the street is a smaller building.  Many don’t know it is there, and some have suggested it actually isn’t.  It looks neither sophisticated (like University Hall), nor a hub of activity (like Action Centre).  Next to the door is a small sign identifying it as “Values & Preferences Department” (VPD).  The building is small, easily overlooked.  Some see it as just an extension of University Hall, while others deny it serves any real function other than to waste a plot of real estate and offer some distraction.  Others tip their hat to VPD and acknowledge that unless it is included, any description of what goes on in the town will be incomplete.

So you want to influence things and are convinced that what really matters is the Action Centre.  Thankfully, that is the nearest place and you head along another street to get there.  Along the way you are drawn into conversation by an intelligent looking individual who makes a case for going a slightly longer route and heading first to the University Hall.  She is convincing, if a little proud in tone.  She makes a compelling case that what happens in the Action Centre, while important, is strongly influenced by the think-tank that is University Hall.  You are intrigued to hear about the phone link and how much of what happens at Action Centre seems to stem from information fed through from University Hall.

Mid-conversation an advocate for VPD interrupts graciously and suggests that the phone lines actually run from VPD and that it would be worth going slightly further and heading there first.  The University Hall representative initially denies the existence of VPD, then claims that it is just a division of the University, then seems to suggest the VPD advocate is just not very sophisticated.  As this conversation goes on, you pick up a newspaper which is full of stories about the Action Centre.  That is where the reputation of the town is forged, so you take your leave and press on to the nearest end of the street.

You ponder what you’ve heard, but feel certain that if you can get to the Action Centre, then you can always head on to the University Hall and the Values & Preferences Department (plus there’s the phone link).  To cut a long story short, you get there and are convinced it is the place to be.  For a while.  But then the influence of the University Hall becomes evident, so you want to head there.  But it is a one-way street and you are at the wrong end.  You ponder the possibility that the VPD might actually be the place to head, but it is a one-way street and you have come to the wrong end.  Even the phones don’t seem to work – you pick them up and hear a lot, but your voice does not travel the other way.

Enough extended analogy…  Too many of us assume that shaping a life in pastoral ministry, or parenting, or whatever, is about shaping the behaviours and actions.  So we head there.  Pressure to conform, lots of printed rules, etc.  After all, this is where a life shows what it is, for good or for ill, so go for good!  But it is possible to pressure and socialize toward behaviour without engaging the mind and the heart.

That is okay.  After all, if you do the right thing, then feelings follow, right?  Not if it is a one-way street, with one-way phone links.  Everything in the “Action Centre” is driven by information from the “University Hall” – so some more sophisticated  folk will focus their efforts there.  But the little “Values and Preferences Department” actually casts its shadow over the bigger buildings down the street.  Whether we accept it or not, the town was designed with this street as a one-way street.  The values and preferences are fed into the very discussions of the think tank so that every thought is shaped by what comes from this little nerve centre.  And if we are to truly shape the lives of others, then we must accept what the Bible repeats from cover to cover – that humans are heart-driven.  The heart is the problem.  The heart will be the centre-piece of the solution.

Ignoring the heart and focusing on knowledge or behaviour will not only fail to address the real issue, it may well lead to other issues: pride in knowledge or performance, Pharisaical hypocrisy, etc.

As we read our Bibles lets be sure to hear what God says about the human heart and its controlling role in life. And let’s pray for wisdom to know how to minister to the heart.

One Response to Shortcut