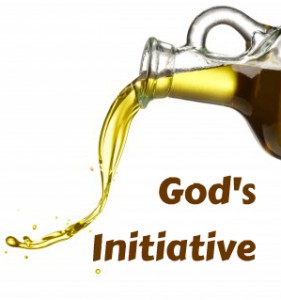 Two men—both living in the same country at the same time—asked God for help.  God remained silent for the one and answered the other.  He let the first man die while he elevated the other to a position of eternal prominence.  Did the first man have a bad connection?  Did the second man have a secret in how to motivate God—did he, for instance, have more faith than the first?  Or was God unfair—arbitrarily ignoring the one while favoring the other?

Let’s take a closer look at the Bible narrative that tells both stories with an eye to see God’s initiative in each case.

The first man, Saul, was selected by God to be the king of his chosen people (1 Samuel 9).  The second man, David, was then picked to replace Saul as king (1 Samuel 16) in a selection made well before the actual changeover took place. The two stories unfold in 1 & 2 Samuel.

Consider their prayers.  Saul, by the end of his career, was desperate to hear from God as he faced a battle with an enemy army: “And when Saul inquired of the LORD, the LORD did not answer him, either by dreams, or by Urim, or by prophets” (1 Sam. 28:6).  The next day Saul was defeated and died in battle.

David, on the other hand, maintained an ongoing and reliable prayer link with God.  In one case David asked whether the people of a walled city, Keilah, would shelter him from Saul who was coming after him—the answer was “no!” (1 Sam. 23:12); and on a later occasion—in a prayer offered about the same time Saul’s prayers were going unanswered—David asked God about his prospects in chasing a dangerous force of bandits who had kidnapped his family.  God answered, “Pursue, for you shall surely overtake and shall surely rescue” (1 Sam. 30:8).

Prior to these compared prayers God had been active in the lives of the two men—he chose them by sending his messenger, Samuel, to anoint each as king (at different times).  In other words God’s caring initiative was at work from the beginning in both cases and both men were fully responsive to him.

Saul, however, faced a major challenge—an invasion by the Philistine army—and he made a mess of things (1 Sam. 13).  How?  He ignored God’s instructions about animal sacrifices.  Sacrifices were to be carried out by Levites—and by Samuel in this case—but Saul (who wasn’t a Levite) performed the sacrifice himself when Samuel was late in arriving.

It was a confused choice: by performing the sacrifice Saul meant to stir God to act on his behalf.  But he violated God’s word in the way he did it!  Saul, in effect, treated the sacrifice as a device in divine manipulation rather than as part of his bond to the God who knew and who cared about his needs.  God’s initiative—in allowing a real hardship—invited Saul to respond by faith; but Saul turned to superstition instead.

Samuel arrived just after the illicit offering and confronted Saul on God’s behalf:  “You have done foolishly.  You have not kept the command of the LORD your God, with which he commanded you.  For then the LORD would have established your kingdom over Israel forever.  But now your kingdom shall not continue.  The LORD has sought out a man after his own heart.”

The man “after his own heart” would be David.  That’s not to say that David was sinless—the Bible makes that clear enough—but what characterized David’s relationship with God from beginning to end was his awareness that God was personally engaged with him: that God was always initiating—taking steps of love—in his direction.  David, in turn, responded.  He never tried to manipulate God.  Instead he spoke to him with heart-to-heart honesty—sometimes in desperation and often with thanksgiving.

What can we take from God as well as from Saul and David?  We find that God’s measure of engagement was heart-based.  David was aligned with God’s heart while Saul wanted to use God’s power.  David’s status wasn’t measured by the strength of his faith but by the focus of his life: he loved God—a devotion that also permeates the psalms attributed to him.

A proper follow-up question for us is, “That’s fine for David, but does God ever take any initiatives in my direction?”

The answer—all but shouted throughout the Bible—is “Yes!”  To name just two, in Psalm 139 we find that God’s hand is present in forming every fetus in every womb.  And in John 3:16 we discover God’s heart for the world is incredibly sacrificial as he gave his Son to die in order to resolve human sin for all who believe in him.

But not many respond and reciprocate that love.  Like Saul, as we read his full story, “people loved the darkness rather than the light because their works were evil” (John 3:19).  God is bold in calling us to respond to his love—taking flawed figures like David, Peter, Paul, the woman at the Sychar well, and more—into his embrace.

Some of us still try to manipulate rather than to respond to God.  Okay, but don’t expect him to answer your prayers.

Let’s take up David’s approach instead: love God just as he loves us and we’ll soon have a growing conversation.