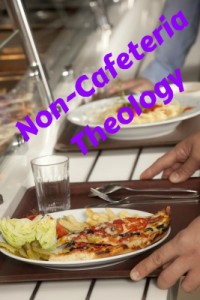 We used to talk about “cafeteria theology” when I was in Bible school.  Cafeteria theology is where you walk along with a tray and select the bits you like, making a personal theology . . . do we have a free-will?  When will Christ return?  How accurate is the Bible?  Which attributes do I like?  Etc.  But the reason we used to talk about it is because we were starting to discover how a choice in one area brings with it some theological elements elsewhere.  It is like picking a starter and automatically receiving the dessert as a result.  This seems confusing to people still picking and choosing their theology.

So how deep does the connection run?  Is it that “systems” of theology have a certain consistency?  That is to say, that if you choose a Reformed theology then your options are restricted in various areas?  Same with an Arminian theology, or a Pentecostal one?  Perhaps.  But we need to recognize that the differences are deeper and more foundational than denominational streams or theological camps.

I have mentioned before the importance of the big handful of questions.  God? Man? Sin? Grace?  Let’s pull a strand and see some of the interconnections.

The other evening I was engaged in a theological debate by my children.  After a couple of minutes I challenged an assumption that came from one of them . . . that we are sinners because we sin.  The talk was about the “first sin” a person commits and hypothetical questions about “somebody who never sins.”  So I turned that around and suggested that we aren’t sinners because we sin, but we sin because we are sinners.  Our choices don’t determine our sinfulness, rather our sinfulness manifests in sins.  This was a good point to ponder.

The conversation was soon brought around to divine judgment.  Does God send people to hell for sins?  “What if somebody only does one thing wrong?”  Recently I have used this illustration a few times . . . too often in our evangelistic presentations we build from Romans 3:23 — all have sinned and fallen short of the glory of God — and talk about God’s “pass mark” as 50, so even if we get a 49, then we still fall short.  Hypothetically this is true.  But it is propagating a superficial “sins” view of the problem.  The human problem goes much deeper.  The truth is that every one of us is a solid, round, zero out of 50.

“Ah, but, what about good people who don’t know Jesus?”  Again, an assumption is in play here.  The assumption here is that sin is about external performance measured against laws.  But the Bible pushes us deeper than that.  What does it mean to be dead in sin?  Why does the Bible make so much of the state of the heart in relation to God?  Why does God find righteous deeds unimpressive when hearts are far from him?  Why was the “religious” older brother as lost as the rebellious younger brother in Luke 15 – that is, his performance may have ticked some expectation lists, but his heart was self-focused, and his father meant nothing more to him than a benefactor/employer and his desire was for benefits rather than relationship . . . he was lost.

Once we probe the one issue of sin, a couple of things become evident.  Firstly, our problem is far more profound than mere law-breaking.  It is a profoundly heart-level and relational issue.

Secondly, other parts of core theology have to be consistent with this biblical view of sin.  If the root problem is relational disaffection and despising of God and assertion of independence, etc.  Then what view of God goes with that?  He must be more than a judge and law-giver.  He must be profoundly relational, creating humanity for some sort of relational participation in His life.  And that is what we find if we are willing to look: the Bible will affirm a much more relational view of God than many have recognized.

What about humanity?  If God is defined relationally, perhaps we then need to ponder how human life is about relational participation, particularly with God, as well as with each other.  Our life does not consist in accumulation of capacities and qualities in and of ourselves.

What about grace?  What is a relational and loving God’s solution to a profoundly relational problem called sin?  Grace must go deeper than forensic forgiveness.  Salvation must be more than mere change in status and destination.  And God’s provision is more than a tweak in heavenly paperwork or graciousness in our direction – again, we discover biblically that God gives Himself to us in salvation, the role of the Spirit becomes massively important.

And grace is not just about getting saved, it also influences the ongoing growth of the Christian.  Is this about performance and independent effort?  Of course not, that hasn’t been the story so far, why go there now?  No, the Christian life is about ongoing participation in the life of God by faith, through the Spirit, in Christ, etc.

We poked away at the sin question, and sure enough, the other questions were influenced as a result.  Pick a question and probe it biblically . . . you won’t be able to stay just in that question for long!