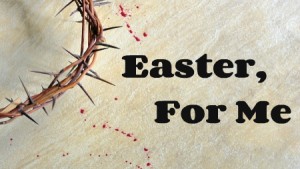 When it comes to Easter, we are truly spoiled. Even though the Bible is a huge collection of documents, most of biblical history is covered in sweeping narratives, or glimpses into specific occasions. But once we come to Easter, we have four accounts that give great detail about that week leading up to the crucifixion and resurrection.

Actually, the earlier part of each Gospel is really an extended introduction to the Easter week. In Mark’s Gospel, for instance, we get to see Jesus repeating his intention to go to Jerusalem where he will be betrayed, beaten, and killed, before rising again. The disciples heard this multiple times. But they never seemed to hear him.

We live in a world brimming over with leaders who are prepared to tread all over others in order to achieve their own goals. We see leaders, who, when push comes to shove, will push and shove the very people they claim to be leading to get what they want. We understandably grow jaded with flawed leadership in the work world, in pop culture, and in politics.

Jesus was different. He intended to die. He came to Jerusalem with a plan and he followed it through to the end.

As we read through the Easter week we can get caught up in the swirl of narrative sub-plots and simmering tensions. The religious leaders plotted to kill Jesus. The disciples scratched their heads at cursed trees and talk of Jesus’ departure. We find that the tension is palpable, and it keeps on building.

Whenever we encounter a narrative like this, we are wired to identify or disassociate. Some characters will bother us. Others will draw us in and share their experience with us.

Who do you identify with in the Easter story?

Do you find yourself putting on the sandals of the deserting disciples, or Peter in his bold declaration of commitment followed by limp failure? Do you relate to doubting Thomas, or perhaps even the corrupt motivations of Judas the betrayer? Maybe you recognize something of power-hungry Caiaphas in your own smaller political sphere, or the outwardly powerful, but privately fearful Pilate – the self-protector?

Does your heart ache with Mary, or grieve at your similarity to the mocking soldiers? Do you see yourself in one of the shouting crowds? Can you relate to undeservingly free Barabbas, or the repentant thief?

I’ve been pondering the twelve hours before the crucifixion:

In the upper room Jesus knew what lay ahead. John’s Gospel gives us chapter after chapter of Jesus’ concern for his disciples, his desire to prepare them for his departure and to pray for them to be kept by the Father.

In the garden of Gethsemane Jesus knew what lay ahead. He sweat great drops of blood and cried out to His Abba for another way if there only could be another. But ultimately, he wanted to do what His Abba wanted him to do.

When he was arrested, Jesus wasn’t looking for an escape route. He didn’t flee up the hill and over into the Judean desert. He stepped forward, stopped the beginning of a battle, and headed toward what lay ahead.

Standing before the most powerful man in Jerusalem – the father-in-law of the High Priest, Jesus stayed quiet. Annas was like a 1st Century Mafia Don, and he wanted to get some sort of incriminating confession, but Jesus knew this was not the real trial. He stayed quiet. For that he was struck on the face. When he finally spoke, he quietly showed who was really in charge.

Jesus was passed on to Caiaphas and a rushed gathering of members of the ruling council. It was shambolic. They couldn’t get two witnesses to agree, and Jesus remained quiet. Eventually he was pushed to talk and he gave the High Priest what he wanted – a clear declaration of his position, using Daniel 7:13. They mocked. They struck. They blindfolded. Even the guards received him with blows.

The Sanhedrin had quickly assembled as the sun peaked over the nearest hill. This would be the quickest “official” hearing ever. Jesus didn’t slow them down. A quick quote from a Psalm and they were agreed again that he should die. Jesus never argued. He was led off to Pilate.

Pontius Pilate doubtless knew they would bring a troublemaker at some point, but Jesus was probably not what he expected. Pilate would have been used to cowering and jabbering prisoners pleading for their lives. Jesus was calm. Assured. It was almost as if Jesus was in charge, not Pilate. But this prisoner needed to be handled carefully. In fact, Pilate saw his opportunity to hand Jesus over to Herod and get rid of his problem. Herod had a track record of killing contemporary prophets.

Jesus was led back to Pilate. Jesus was innocent, Pilate kept asserting that. But the crowd on his doorstep troubled him. His superstitious background was stirred to hear that Jesus was a god. Try as he might, Pilate failed to release Jesus. A scourging. A prisoner release. A handing back. Nothing worked. Eventually it came down to Jesus or self. Pilate chose self.

Jesus was led away the short distance to be crucified. Innocent. Quiet. Beaten. Purposeful. Jesus intended to die.

And that is the identification our hearts must make again this Easter. He came to die, for me.