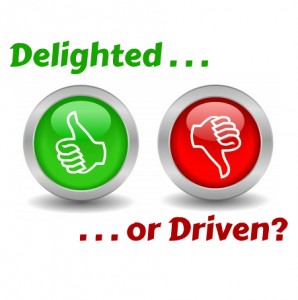 A rich benefit in reading through the Bible regularly and at a bold pace is that themes start to jump off the pages.  One of these—I’ll note it in a moment—especially comes to mind on weekends when believers gather to sing hymns and choruses that profess an unbounded delight in God.  At the same time we regularly hear calls to take up the spiritual disciplines as the way forward to a proper faith.  But it’s an illicit combination.  If only we could make up our minds!

Here’s the issue: God is either the ultimate expression of attractive; or he’s a dull and grumpy drudge of enormous proportions.  So which is it?

One vision of God is so compelling that only a fool would hesitate to pursue him with every bit of energy possible.  And the other suggests a God so noxious that only those who are pressed to get closer to him by coercive social pressures will ever go there.  One relies on God’s delightful personality; and the other relies on pushing people to do what they really don’t have any energy to pursue.

We need to ask, then, what God thinks of these competing portrayals of his character.

Thankfully the Bible read-throughs answer this question as one of its stronger themes.  Listen, for instance, to Isaiah 29:13—later cited by Jesus (see Mark 7:6-7)—“[Spiritual blindness comes] Because this people draw near with their mouth and honor me with their lips, while their hearts are far from me, and their fear of me is a commandment taught by men . . .”  This implicit distaste for God offends him and blinds his ‘followers’.

Jeremiah pressed the same notion when God spoke through him to the residents of Jerusalem, “I remember the devotion of your youth, your love as a bride, how you followed me in the wilderness, in a land not sown” (2:2).  God then presses the point by sharing his shock and grief, “for my people have committed two evils: they have forsaken me, the fountain of living waters, and hewed out for themselves broken cisterns that can hold no water” (2:13).

I could cite dozens of similar texts that all affirm God’s heart as being broken by the disaffection of the world despite the tenderness he feels towards his creation, a tenderness always presumed in Scriptures as the basis for creation.  We recall, in particular, God’s communing presence in the Garden of Eden that was rejected by our parents-in-the-flesh in favor of the serpent’s demeaning lie.

Let me press one aspect of the problem Jesus raised: that human traditions can be a problem.  One such human tradition is a premise Thomas Aquinas (c. 1250) promoted: that the human heart actually “wants” God but struggles with a disabled will.  In other words, we really desire God but somehow lack the willpower to fulfill that desire.  And that assumption—one that Evagrius Ponticus, Pelagius, and John Cassian, among many others, promoted centuries before and many still promote today—sets up a key assumption of the spiritual disciplines: that a community of fellow strugglers or a spiritual drill instructor can help overcome the problem of weakened wills.

The critical question to be asked is whether this is biblical: is sin defined by weak wills that fail to support our underlying disposition towards goodness?  Or is the problem that we don’t actually want to embrace God as he really exists?

In reading the Bible we find the latter is true—and the theme I noted is affirmed: the fallen heart is actually captured and driven by visions of replacing or at least of taming God.  And it does not love or even have much interest in him for who he is.

So that’s what grieves God.  Not, as Aquinas held, that we’re too weak to overcome Adam’s presumed legacy of moral inertia.  Instead the problem is a blinding self-love.  And our selfish-will—motivated by this self-love—is too strong, not too weak!

Let me note Romans 5-8 here.  Some use Paul’s discussion of our struggle with sin to promote discipline-based spirituality.  But that option fails.  What promoters miss is that our habits of the heart (the “flesh”) still compete with our newly found delight in God’s ways.  This desire anchors “the inner man”—newly birthed by the coming of the Spirit—and he, the Spirit, continually pours God’s love out in our hearts (Romans 5:5).  This new love—the fruit of his presence—still has to compete with old and entrenched habits associated with our physical body and soul that once operated solely on the basis of self-love.  But we’re promised a new body to come; and even now the growing bond of our love for Christ carries us forward; and nothing can separate us from that love (Romans 8:39).

Which brings us back to where we started: Spirit-based faith is always motivated by a love-driven delight.  So when we struggle let’s ask for a clearer vision of Christ and trust the Spirit to pour yet more of God’s love out in our hearts.

And, with that, let’s quit treating God like a cosmic drudge.

2 Responses to Delighted or Driven?