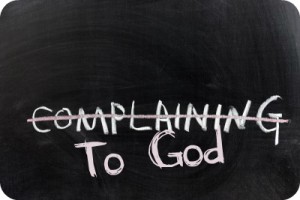 Is it ever okay to complain to God? Is it appropriate to tell him that we think he’s done a terrible job and needs to start getting things right? Should the topic, “Proper forms of complaining in prayer,” be included in workshops?

Some may cringe at even asking the question: “No, of course not! God is perfect in every way! How dare you ask?!”

Fine: I, too, would affirm that God is above reproach. Yet there are still grounds for asking the question. God—the Father, Son, and Spirit God—is trustworthy and right in all he plans and does; but our own limited grasp of God and his ways calls for some space here.

Think, for instance, of how Moses complained about the weight of leading Israel in the wilderness: “the burden is too heavy for me. If you will treat me like this, kill me at once . . .” (Numbers 11:14-15). God responded by sending the Spirit on seventy elders to share Moses’ load. Or consider Habakkuk 1:2, “O LORD, how long shall I cry for help, and you will not hear?” God responded by revealing his plans to punish the people of Judah whose sins troubled Habakkuk. Job complained about his miserable circumstances again and again. And in the end God reversed his fortunes.

In each of these examples the Bible narrative makes it clear that God stood behind the misery that led to the complaints—at least indirectly if not directly—so that the complaints were all properly targeted towards him. The prayers, in turn, were all answered in ways that reassured the complainers.

Some complaints, however, were not so well received. In the same episode of Moses complaining about his struggles as a lonely leader—in Numbers 11—we find a bad sort of complaint among the people. Bad, at least, if measured by God’s response: he sent fire and a plague among the complaining crowds. What was their problem? They missed the food they once enjoyed in their Egyptian enslavement.

An even more dramatic complaint-and-punishment cycle is reported later in Numbers when twelve spies were sent into the Canaanite territories. Ten of the men came back with such a negative report that virtually all Israel was terrified at the prospect of moving ahead. At the heart of their complaint was a charge against God’s character and his good plan for them: “Why is the LORD bringing us into the land to fall by the sword?” (14:3) God’s response? He determined that every one of the complainers would die without ever entering the promised land: a promise he fulfilled.

We can ask a question, then. Is God being petty? Do we need to frame our complaints in ways that avoid critiques of his character? But then complain loudly while inserting an occasional “at’a boy, God!” to keep him happy?

God forbid. The real issue is the trajectory of our complaints: are we complaining in the context of our own presumed divinity, as we oppose him and try to compete with him? Or are we complaining about the challenges we face in a fallen world, yet while still trusting his character?

Listen, then, to Job: “Though he slay me, I will hope in him; yet I will argue my ways to his face” (13:15). Here we find Job’s boldness that both presumes God’s goodness—as the focus of Job’s hope—and presumes that God’s inscrutable willingness to allow evil must have a basis that Job can still try to grasp.

One form of complaint carries us away from God; the other draws us into his arms. In a real sense the latter is a faith-based complaint—“God, I trust you, but this is really, really hard!” So complain if you must, but always remember that God is good. And he loves us.

Why By This?
Does Jesus Tell Us To Love Ourselves?

One Response to Complaining to God