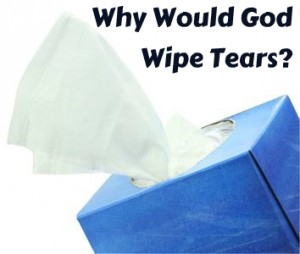 It is a famous biblical phrase, but have we stopped to consider what it is saying?   “The Lord GOD will wipe away tears from all faces…” Isaiah writes this in what you might call the “song of the banquet hall.” Let’s consider the context before we probe the point I want to underline in this amazing statement.

After 11 chapters of burdens against the nations, Isaiah 24 describes final judgment of the nations. It feels like a heavy chapter. After humanity has poured all its energy into a pseudo-version of life with God omitted, God pulls the plug.

I remember one of my teachers at seminary describing this in terms of the day after the fair leaves town. There was noise and music and lights and laughter and smells and tastes and the fair was an amazing illusion of real life, but it wasn’t real. It was virtual reality, but cold hard reality hits home when the field is empty, desolate and covered in litter the next day.

Ever since Adam and Eve were expelled from the Garden, humanity has been trying to concoct a virtual reality to fill the emptiness of life without God. Entertainment. Distraction. Candy floss and Coke. Emptiness.

Isaiah 24 describes how God will pull the plug and finish the farce. Putting it in terms of the fair closing down could make God sound like a killjoy, but far from it. In the midst of the judgment, Isaiah hears the sound of singing wafting in from a distance. What could people possibly have to sing about in the face of judgment?

The next three chapters are full of song. There’s the song of the vineyard in chapter 27, the song of the secure city in chapter 26, and in chapter 25, Isaiah takes us to the banquet hall. From verses 6-8 he gives us a taste of that feast to come. Instead of candy floss and Coke there is aged wine and marrow-filled meat . . . this is royal feasting in place of the dissatisfying emptiness of fairground food.

Instead of living a pseudo-life in perpetual denial about the impending death that faces everyone, God will swallow up death forever. What a thought! In Isaiah 5, death is described as having a voracious appetite . . . it just keeps on eating – war, terrorism, Ebola, old age, malnutrition, cancer, malaria, violence. All of humanity from the richest to the poorest are equals before the insatiable appetite of death. But God will swallow up death forever!

As well as feasting instead of emptiness and life in place of death, there is one more touching detail to note. Literally touching. He will wipe away tears from all faces. How many fairground visits end in tears? Children distraught at impending bedtimes, teens disappointed at empty relational hopes, even gamblers regretting empty wallets. The pseudo-life of this world leaves us all in tears, but not the life God intends to restore.

Here’s the thing, though: surely God is powerful enough to be able to click his fingers and all tears would be gone. Let there be light, boom, job done. If God can create the heavens and the earth with the power of his word, why does He bother to actually wipe tears from faces?

Perhaps He doesn’t. It may be a figure of speech, but I suspect it goes further than that. After all, the kind of God who would actually reach out and gently remove the tear from our cheeks is probably the same kind of God who would actually reach out and taste death in order to conquer and swallow it. Couldn’t God simply defeat death by an act of His power? He is in charge, after all. He could say the word and guilt could be gone, sin extinguished, death defeated, even heaven filled. But instead this God chooses to come to “this mountain” of Jerusalem and enter into death in order to defeat it fully.

It seems like God’s great goal is not simply to show off His super strength and crush the challenge that sin has posed. Rather, He steps in to our world so that His victory over death, just like His victory over tears, is a heart-winning victory. Hypothetically God could fill heaven by some sort of benevolent omnipotence. Instead he does it through humility and apparent weakness. Why? Because God’s ultimate goal doesn’t seem to be to show off His power, but to give away His love.