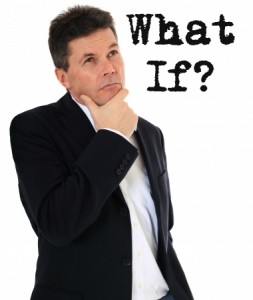 What if Adam had told Eve, “No, my love, we won’t eat that fruit—it’s been forbidden to us. Our lovely God told me very directly, ‘Don’t eat from that tree’ and he’s to be trusted and obeyed no matter what the serpent said.”

Or what if, as considered in 1 Samuel 13:13-14, Saul had proven to be obedient—and a man after God’s own heart—so that God’s promise through Samuel had actually come about: “For then the LORD would have established your kingdom forever”?  Saul’s status as one of the Bible’s despised figures would have been reversed.  Yet with his rebellion that eternal stature came instead to David.

My point here isn’t to speculate on what might have been if these past events had turned out differently.  Instead I’m reminded—and want to remind you—that each of us is always living on the cusp of what might or might not be.  And we need to ask ourselves whose heart is moving and shaping our hearts as we move from a “what if” into our “what is”.

Are we aligned with the first Adam who listened to a false calling?  Or with Jesus, the new Adam, who rejected each of the serpent’s invitations to rebel and said, instead, “You shall worship the Lord your God and him only shall you serve” (Matthew 4:10). Are we, like Saul, spiritual pragmatists with a selfish bottom line?  Or responders like David who delighted in God even in the face of a Goliath?

How will life unfold for us when we respond to God’s love through faith?  Or, alternatively, what have we missed by living in relative independence from God?  The question has been raised in the Bible—though it’s sometimes fogged over by a misapplication of predestination.

We find this related to the salvation of some—as in the Pharisees and the lawyers of Jesus’ day who “rejected the purpose of God for themselves” when they dismissed the ministry of John the Baptist. Or, again, in Pisidian Antioch where Paul and Barnabas told the synagogue leaders, “Since you thrust aside [God’s word] and judge yourselves unworthy of eternal life, behold, we are turning [instead]” to the Gentiles” (Acts 13:46).

The same sort of contingency is also seen in the lives of believers: our responses to God shape his response to us in matters of reward and condemnation. Paul, for instance, wrote in 1 Corinthians 3 & 4 of the foundation we lay in this life for the next, with the reward and commendations that lie ahead of us depending on how we live in this life.

The space for this apparent freedom is found in our hearts and not, as is so often assumed, in the self-moved will.  In other words Paul isn’t affirming the relative autonomy of the will that Pelagius, Arminius, and so many others later presumed.  But in following Paul we are not, on the other hand, affirming the priority of the human will that William Perkins and so many Puritans affirmed.  Instead the moral measure of our souls is what we love; and God who will “disclose the purposes of the heart” knows our deepest motivations.

So our “what if” of this entry turns on the question of how near we are to being what we were made to be.  We can think of Ephesians 2:10—that “we are his workmanship, created in Christ Jesus for good works, which God prepared beforehand, that we should walk in them.”  Are we living in a “faith working through love” that ensures our fruitfulness in Christ’s design for us? Or are we morally misshapen clay—only useful for showing off the justice of God’s judgment against all who ignore the Son?

In other words we all have a freedom to love—in response to God’s prior offer of love in Christ—or not to love.  God never forces us to love him.  And we will never be a David if our love is for our own benefits and security: that’s the heart of an Adam and a Saul.

So what if a Billy Graham had become an actor instead of a revivalist? What if a Mother Teresa had become a local school teacher in her homeland rather than the compassionate missionary she became in Calcutta?  The world would have missed their brilliant light in its deep darkness.

So the question stands before each one of us: are we missing what we could be simply because we love our personal security and comforts?  Or are we instead discovering the joy of a bold faith?  What if all who are called Christians really trusted Christ?  What could come of that?  Heaven only knows—but I’d like to be part of it.  Are you with me?