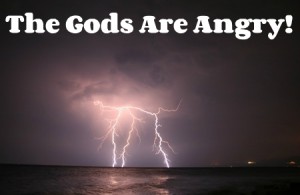 In ancient days a violent storm or a volcano eruption were readily explained: “The gods must be angry!”  “The gods” seem to have been capricious beings who used the earth as a whipping post.

So what about the true God’s anger and our experience of the storms of life—both metaphorical and tangible? Is most of life best explained by a theology of God’s capricious wrath?

No. God, no matter how he’s portrayed by his critics, does not struggle with anger management issues. Instead the Bible explains God’s wrath by starting with the serpent’s promise in Genesis 3, “You can be like God.”

This bold lie—a claim that replaces God as the single center of reality with a host of alternative centers—was embraced by humanity and instantly distorted every human perception of life.

The distortion is seen in human motives. Adam was made to be other-centered, with God’s love as his ultimate delight. But when the first man embraced the serpent’s premise of being like god it led him to a new self-concerned orientation—to focus on his nakedness and needs. An ambition for autonomy had replaced his prior rest on God’s providential love.

And with the resulting departure of the aggrieved Spirit each of Adam’s offspring now has to be wooed by God. The Spirit is no longer an indwelling companion but now stands outside the soul calling and inviting a response to God’s love and a trust in God is now supernatural. The premise of independence turned human freedom into the ultimate human goal.

This is where human anger emerges. Anger is a motivational defect of an upended metaphysic. From Eden onward our true being as creatures—made by God, for God—is denied. And anger is the sense of being violated while trying to achieve the destiny of a god. Or, more to the point, a given bout of anger almost always points to a circumstance where our ambition to be a god isn’t working.

Yet we must say “almost” because there are times when anger is a proper affection.  Paul warned, for instance, “Be angry and do not sin; do not let the sun go down on your anger, and give no opportunity to the devil” (Eph. 4:26-27).

So when and how is anger proper?

We need to turn to the Trinity and to the first creation for our answer. As we probe the events of Eden the dispute between God’s word and the serpent’s word involves even more than a conflict about death and autonomy.

We recall the starting point of the debate as “you shall surely die” versus “you will not surely die.” This featured the nature of life. Jesus later exposed the ultimate issue as a contention about whether a life “born of the flesh” is the same as a life “born of the Spirit.” Life, he made clear, actually consists in God’s participation in the soul by the Spirit. The devil was offering a realm of ongoing animation apart from God’s life: a living death. Jesus exposed this as a false option.

There was another implicit element in this debate. How does God’s life actually exist?

The premise of Genesis chapter one is that God exists as a being-in-communion. He is a God who speaks in a plural voice: “let us make man in our image.” The rest of the Bible presents the substance of this statement as the Father-Son-Spirit reality unfolds over time. He was fully present from the beginning but after the fall his reality needed to be restated and demonstrated.

The serpent in his hubris dismissed this relational reality as he invited Adam to a new vision of deity: to singularity and autonomy as the basis of being. Why this arrangement?  Because he needed to stake out metaphysical space for challenging God. And by positing being-as-a-singularity he could deny any need for dependence. In this scheme every “relationship” is strictly utilitarian and self-serving—a negotiation among gods who, when violated, become angry.

So after Eden the functions of individual thought and action were treated as the basis for being. And in this presumed reality deity is linked to every thinking-choosing creature. Taken in biblical terms this meant that any bond between the true Creator and his creatures is re-envisioned.

But the vision is nonsensical—given that God still sustains the creation—even as the devil redefines life, death, being, and morality on the basis of autonomy. He needs God’s gracious docility to make it work. The serpent, in effect, presumed on grace to dismiss grace. He declared each animated being to be a carrier of deity—the stuff of polytheism—and tried to make it work.

Without ever saying so the devil was and still is the guiding spirit in this presumed realm of autonomy. He was, in other words, still deploying the relational bonds of our creation in God’s relational image to slip into the coaching role once held by the Holy Spirit. As an unholy spirit he thought he could devour all God’s people by simply employing his ultimate Lie to redirect faith away from God while calling people to trust his Lie.

Now, back to anger. In John 3:35-36 God sets out the basis for his own anger. It has everything to do with the Father’s devotion to his Son—the bridegroom of the faithful (cf. 3:29): “The Father loves the Son and has given all things into his hands. Whoever believes in the Son has eternal life; whoever does not obey the Son shall not see life, but the wrath of God remains on him.”

So when is human anger proper? Only in the moments where we have our hearts aligned with God’s heart. When is it improper? Whenever our hearts are aligned with the Lie. That’s the realm of God’s wrath.

As we embrace the triune God, then, let’s allow him to make things right in the end. That means we don’t need to take anger to bed at night because we’ve dismissed the Lie. God is still God.