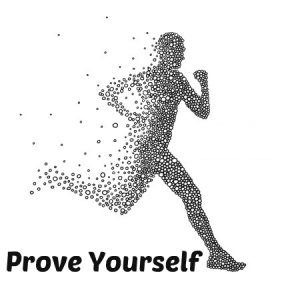 One of the hardest things in life is the feeling of having to constantly prove yourself. You can’t ever relax when you have to earn acceptance or pay back loyalty. Husbands and wives, parents and children, best friends, complete strangers – we all know how it feels when relationships become centres of perfection and performance rather than acceptance and love. It’s a never-ending treadmill of approval. You have to be funny, pretty, strong, rich, clever, gifted, impressive…whatever it takes to prove yourself worthy of that person. And the pressure can be crippling.

It’s Elsa’s gloved-life, “conceal don’t feel,” that explodes into a monster on the mountain.

It’s the “earn this” that drives Private Ryan’s response to being saved – two words that drive him to despair and uncertainty.

Conversely, the very best relationships are the ones where we can be ourselves and are still accepted. We can rest only in relationships where we feel truly safe. That’s true in families and churches because it’s true of God. Too often we turn the Christian life into “earn this.” But at the heart of Christianity is a God with a heart, a God whose love spills over and will not let us go!

Think of Jesus after His resurrection in John 20. The disciples gave Him plenty of reasons to be annoyed, but He never once said “prove yourself.” They were (almost) all behind closed doors. Despite hearing news that Jesus is alive their instinct was to hide. Again. So when Jesus walks in is He disappointed? “You idiots what are you doing? You better make sure you never do it again.” No. Jesus stands in the group and says peace. Twice. “You and me isn’t over – as the Father has sent me, so I send you.” Jesus doesn’t give them weights, He gives them Him.

Think of Jesus the next week – same time, same place, but now with one extra guest. “Thomas you idiot why didn’t you believe your friends? You better make it up to me.” Nope. “Peace… I’m here for you Thomas, and I’m here for those who don’t see me and still believe.”

Think of Jesus in John 21. Some of the disciples weren’t in Jerusalem anymore, they’d gone home to fish. It’s what they knew best. But then the deja-vu kicked in and Jesus began to cook them breakfast – not a hint of “why are you idiots fishing?” Instead Jesus initiates and provides. Again.

Think of Jesus talking with Peter. They must have talked about the elephant in the room before this day, but this is where it gets overt. “Peter didn’t I tell you you would deny me? Don’t you dare let me down again.” Jesus doesn’t say that. He gently reminds Peter that loving Him means following Him. And that’s it. Even when Peter points to John (they’re forever competing, those two!) Jesus keeps Peter’s focus on Himself. Two weeks before, Peter promised he would never leave Jesus. He didn’t make it through the night. But with Jesus, following Him, he remained faithful and many years later was walked out to a Christ-like death.

The point is that Jesus doesn’t ask for you to prove yourself. He doesn’t demand performance in order to be loved and accepted by Him. We don’t need to conceal anything from Him, we don’t need to earn this love from Him. To purposefully misquote a classic hymn, “There is no shadow of earning with Thee.”

If being a Christian feels heavy to you, if you find it exhausting, perhaps you’ve turned Jesus’ love into a never-ending treadmill of performance. Look at Jesus and live. Follow Him, run with Him. He offers peace, He invites you into the safety of His Father’s heart. His love will never let you go.

2 Responses to Prove Yourself