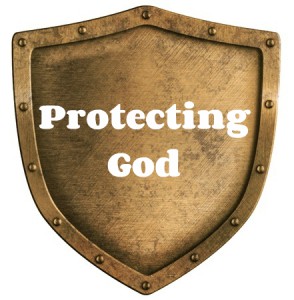 Have you ever heard someone answer a question about Jesus’s nature or his activities by starting with one of these two phrases: “Jesus in his divinity …” or “Jesus in his humanity…”? It may be easy to speak of Jesus this way, but it is unbiblical.  None of the biblical authors speak of Jesus this way.  Also, the ecumenical councils of Ephesus (431) and Chalcedon (451 AD) did not recognize it as orthodox.

Instead of getting into the weeds and nuances of the various Christological heresies that the church has produced and rejected, let me offer possibly one of the major reasons for this continued problem—the rational notion of incommensurability.   The concept assumes God is a completely different kind of substance than his creation and so he must always be absolutely separate from it.  Just as an artist cannot share her being-ness with her statue, Greek philosophy would have us assume that the “Ingenerate” (God) therefore cannot share his being with the “generated” (creation). Yet a fundamental belief for the Christian faith is that God completely “infleshed” himself in Jesus of Nazareth, who suffered, died, and rose again.

Do you see the clash of human reason and the Bible?  Can you feel the danger of the logical notions of incommensurability?  It clouds the very nature of the Triune God and his love for his people.  But why play with such fire when there’s no biblical reason to protect God’s nature from Jesus Christ?

Let me offer one historical anecdote to answer my rhetorical question.  Nestorius, Patriarch of Constantinople (428-431), in one sense happily separated Jesus’s two natures.  For instance, Nestorius angrily protected the nature of God’s attributes when he responded to a simple question of why a Christian could not simply call Jesus God, “We must not call the one who became a man for us God … I refuse to acknowledge, as God, an infant of two or three months.”  Yet at the same time he insisted:

Christ is indivisible in His being Christ, but he is twofold in His being God and Man . . . We know not two Christs or two Sons or Only-begottens or Lords, not one and another Son, not a first and a second Christ, but one and the same, who is seen in his created and His increate natures. (JND Kelly’s Early Christian Doctrines, 314)

In the classical sense of “Nestorianism” Nestorius did not follow the heresy named after him, the idea that the two natures of Christ are separable.  He envisaged that the divine nature of the Word and human nature subsisted in the nature of “Christ” voluntarily.  That is, the two natures are in union through a free and mutual love, not natural or hypostatic as Chalcedon would conclude. Nestorius avoided the confusion of the two natures yet held natures as indissolubly one.  But the manner in which he spoke of this union in order to protect both natures seemed to protect God from the cross in an unbiblical fashion.

Nestorius’s Christology was formed by two concepts: (1) the incommensurability and impassibility of God; and (2) the need for Christ to be both fully divine and fully man if he is to save us.  Consequently, one must hold to a single nature in Christ for salvation but at the same time protect God from Christ.  Let me be clear, I’m not suggesting that the Father suffered and died on the cross (patripassionism), but the New Testament does not allow for incommensurability because Jesus, the infleshed-God, died on the cross.  Look at Colossians 1:15-23:

He is the image of the invisible God, the firstborn of all creation.  For by him all things were created, in heaven and on earth, visible and invisible, whether thrones or dominions or rulers or authorities—all things were created through him and for him. And he is before all things, and in him all things hold together. And he is the head of the body, the church. He is the beginning, the firstborn from the dead, that in everything he might be preeminent.  For in him all the fullness of God was pleased to dwell, and through him to reconcile to himself all things, whether on earth or in heaven, making peace by the blood of his cross.

And you, who once were alienated and hostile in mind, doing evil deeds, he has now reconciled in his body of flesh by his death, in order to present you holy and blameless and above reproach before him,  if indeed you continue in the faith, stable and steadfast, not shifting from the hope of the gospel that you heard, which has been proclaimed in all creation under heaven, and of which I, Paul, became a minister.

In Paul’s thought there’s no notion that fullness of the divine must be protected from the suffering that took place on the cross.  Without the God-Man on the cross reconciliation doesn’t happen.

It’s the commensurate God who shares his being with his creation in Christ that makes salvation possible.  Without it we distort the Gospel.  We need God to define his nature in the Bible.  The methodology of human logic only misshapes the Triune God and the Gospel into something that isn’t Christianity.

Thankfully this isn’t the case, the story of the Bible is about the commensurate God who came and dwelt among us in order to raise us up to be seated with him in glory!  We worship the God whose exact imprint is seen in Jesus of Nazareth!

So the next time you hear that “Jesus in his humanity did a, b, or c” maybe a good question to follow would be, “Do you think God cannot share his nature with his creation?” Or if you’re not convinced by what I’ve said here, perhaps in your next read through of the Bible you could keep this question in mind.  I trust you’ll enjoy seeing the unprotected God.

A Secret Society?
A Clear Connection