Huw Williams was part of the first Cor Deo team in 2011. Since 2012 he and his family have been living in Italy, pastoring the International Church in Torino. Huw also serves alongside Peter in the Bible Teachers Networks at the European Leadership Forum each May. We are thankful to Huw for this post reflecting on his experience of preaching through Luke. 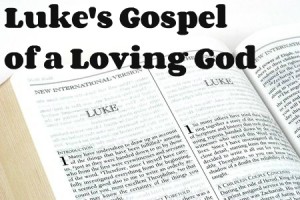 We finished our sermon series in Luke’s gospel on Sunday. Having begun in Advent 2013 with the birth narratives (and having broken off for a couple of breaks along the way to look at other books) it was fitting to reach the resurrection in chapter 24 on Easter Sunday. With all the skill and pacing of a master story-teller, Luke builds his narrative to a great climax through the crescendo to the death and resurrection of Christ in the final chapters of his gospel. It has certainly been a powerful journey.

Looking back over the whole series in Luke, I have so many reflections, but allow me to just dwell on one: the element of Luke’s account that has had the deepest impact on me. It is this, that Jesus passionately and faithfully loves his Father in heaven and those around him, even in the greatest suffering.

So many of the key events in Luke’s account seem to focus on this relationship between God the Son and his Father; Jesus’ baptism, with the great affirmation of his Father in love and the anointing of the Holy Spirit, and the subsequent temptations – all of which seem to tempt Jesus with an alternative path dependent on breaking that love relationship with his Father – to name just two. But this unshakeable love between Father and Son is perhaps seen nowhere more clearly than in the Easter narratives.

Firstly, consider Gethsemane. Remember what is in prospect for Jesus as he wrestles in prayer there. The thought of the physical suffering of crucifixion alone would make a trembling wreck of the strongest of us, then add in the emotional suffering of betrayal, denial and desertion of his closest friends and even this is just the beginning. The eternally beloved Son is about to be separated from the love of His eternally loved Father – for what reason? – to bring rebels and rejecters of the eternal love of God back into loving relationship with him. And when we grasp something of this context, Jesus’ prayer that the Father’s will be done (over and above his own comfort, even his own life) is simply staggering, and can only be an expression of the most staggering love.

Secondly, consider the cross. In the middle of all the pain already mentioned, surrounded by people who simply can’t wait for him to die, who taunt and mock him while he is doing so, and Jesus is thinking about, Jesus is loving, Jesus is forgiving… them. “Father, forgive them…”, “…today you will be with me in paradise…” I say it again, this is simply staggering love, a love so unlike any other love we can or will ever experience. Small wonder that at least two people witnessing the scene, seeing how Jesus dies, come to understand why Jesus dies!

So now, may that love which is poured into our hearts by the Holy Spirit move us to love in response to the extraordinary love of our triune God!

One Response to Luke’s Gospel of a Loving God