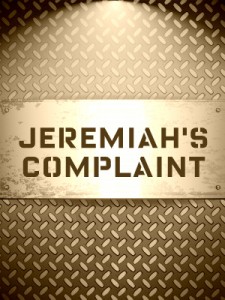 Jeremiah, the 7th century BC prophet, had a tough job.  God called him to tell his family, friends, and neighbors in Jerusalem how wrong they were.  Their views of God, destiny, and personal security were case studies in denial.  They needed to face reality and Jeremiah was there to supply that reality.  But they refused to listen.  Instead they despised the message and, with that, the messenger.

Finally the prophet snapped: “Oh, mother, how I regret that you ever birthed me!”

He was hated for being God’s faithful spokesman—a position very rare in his day—and it was too much.  He went on, speaking directly to God: “I did not spend my time in the company of other people, laughing and having a good time.  I stayed to myself because I felt obligated to you and because I was filled with anger at what they had done” (Jer. 15:10).

Yet his complaint wasn’t against what God was telling him—and what God told Jerusalem residents through him.  Instead God’s words were Jeremiah’s delight: “As your words came to me I drank them in, and they filled my heart with joy and happiness because I belong to you.”  His challenge, instead, was in being alone because he stood with God.  He was lonely in his faithfulness:

“Why must I continually suffer such painful anguish?  Why must I endure the sting of their insults like an incurable wound?  Will you let me down when I need you like a brook one goes to for water, but that cannot be relied on?” (verse 18).

These sharp words of pain and frustration were aimed at God.  So how did God respond?  Let’s listen in to God’s answer (verses 19 & 20).

“‘You must repent of such words and thoughts! If you do, I will restore you to the privilege of serving me.  If you say what is worthwhile instead of what is worthless, I will again allow you to be my spokesman.  They must become as you have been.  You must not become like them.  I will make you as strong as a wall to these people, a fortified wall of bronze.  They will attack you, but they will not be able to overcome you.  For I will be with you to rescue you and deliver you,’ says the Lord.”

In the end Jeremiah was faithful—though he remained both despised and lonely—and his warnings to his judgment-denying neighbors were soon fulfilled.  He, in turn, continued to respond to God’s heart through messages that filled him with joy and happiness—and God sheltered him in the process.

What should we make of this exchange? Jeremiah and his complaint were honest and he was, indeed, in a very hard spot.  Yet God’s response was unyielding.

A point we can take from the exchange is that there may be times when being faithful will be more painful than we think we can handle.  Yet our own faithfulness and faithful witness may offer the sole prospect that others might hear of God as he really exists.  Our family, friends, and neighbors must hear of our Triune, loving God, even as they may more often than not be antagonistic towards us and our words.

So in a fallen world we can hardly expect to be popular as we share reality to those deep in denial.  Our words will be denied in return.  Yet God still wants voices to speak of a nearing judgment with words of invitation to our own peace and joy in him.

Call it the gift of being like a bronze wall: faithfully caring and faithfully sharing even in the face of hostility and loneliness.  In eternity we will find that standing with God and his word was a proper affection.  We are not alone in the process.  He loves and persists in sharing his delightful words to us and through us.  Some will listen.