This is another guest post from our friend Gretchen. We’re very grateful to her for her prayers and support! 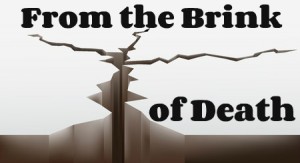 Do you ever find yourself reading narratives in the Bible and thinking, “I would never do what those people did!”?   I had one of those moments recently while reading through the book of Numbers.

Korah and his followers decided that Moses and Aaron ought not to be wielding so much power among the Israelites. The group of them came up against Moses and Aaron and said, “You have gone too far! For all in the congregation are holy, every one of them, and the LORD is among them. Why then do you exalt yourselves above the assembly of the LORD?” (Numbers 16:3). I’d like to think I’d know better than to do that.

And then there’s Moses’ response. He fell on his face and looked to God to provide the confirmation of who was in charge. Furthermore, he begged Korah and his followers to remember how the Lord had chosen them and their fellow Levites, “to bring you near to himself, to do the service in the tabernacle of the LORD and to stand before the congregation to minister to them…” (Numbers 16:9). I want to believe I would be more like Moses—humbly looking to the Lord to handle the rebels, all the while begging them to consider their ways.

The Holy Spirit brought very swift correction to the thought that I wouldn’t respond like Korah and would respond like Moses! But there’s more to be observed from the story of Korah.

We know how the story goes. Moses stands before all the people and tells them that if these fellows die a normal death, then the people will know that the LORD has not put Moses in charge. But if the ground opens up and swallows Korah’s group, then the people will know that these men have despised God. Numbers 16:31-32 tells us what happened: “And as soon as he had finished speaking all these words, the ground under them the split apart. And the earth opened its mouth and swallowed them up, with their households and all the people who belonged to Korah and all their goods.”

So that was the end of Korah and his whole family…or was it? In Numbers 26 we read a retelling of the story of Korah and how he and his gang contended against the LORD. Yet verse 15 says, “But the sons of Korah did not die.” They didn’t? Well, then, what became of these men, the sons of Korah, who had been saved from the brink of death when the earth opened up and swallowed their father?

We don’t know a lot of details, but we do get a window into how the experience impacted their hearts. Psalm 42, written by the sons of Korah, says, “As a deer pants for flowing streams, so pants my soul for you, O God. My soul thirsts for God, for the living God” and “By day the LORD commands his steadfast love, and at night his song is with me, a prayer to the God of my life.” In Psalm 46, they make a very poignant statement, given their family’s past: “God is our refuge and strength, a very present help in trouble. Therefore, we will not fear though the earth gives way…” In reading the Psalms of the sons of Korah, we see the hearts of men who love God, who praise him, and who know of His power, righteousness, justice, and love.

I want to believe I wouldn’t behave like Korah and his followers. I want to believe that if I came up against people like him, I would respond humbly like Moses. But the truth is, I am most like the sons of Korah, that is, one who has been rescued from the brink of death. I deserved to be swallowed up by death, but instead Christ rescued me and gave me life through His death on the cross. May the Lord give me a heart like sons of Korah, a heart that thirsts for Him.