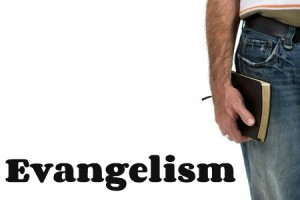 My friend is an evangelist, a global Christian activist who offers the gospel whenever and wherever he finds opportunity. After any restaurant meal, for instance, he’ll fold the tip in a gospel tract. His voicemail message offers a gospel invitation to callers. His favorite strategy is to take non-Christian friends golfing in order to engage in a gospel conversation somewhere on the back-nine.

There’s a lot of what my British friends call a “high cringe-factor” in his sharing: many folks run for cover when he heads their way! He recognizes that response, of course, but treats it as the cost of doing business. Sometimes he recalls Paul saying, “For I am not ashamed of the gospel.” So it doesn’t matter what others think.

And, to be honest, I know he views me as one who doesn’t take Christ’s call to evangelism very seriously. He’s right, of course. At least by his measure. I’ve never seen much fruit in his approach so I don’t use it. But I don’t despise it. If even one person comes to faith by reading a tract he left behind, great. God’s hand isn’t short in using any means to save some.

But recently the time came for me to tell him that I’m also an evangelist. His eyebrows arched in surprise and skepticism. Was I kidding?

“My focus is the church,” I told him. “Many ‘Christians’ have never actually met Jesus so whenever I teach or preach I offer what I know I needed to hear before I came to a living faith.”

Here’s my approach. The church is a ready audience because people come each week expecting to hear someone talk about Jesus from the Bible. And lots of these folks are where I once was—assuming they have a proper faith while not actually knowing Jesus.

Call it a social or cultural faith. But—without wanting to be ungracious yet to be honest—it isn’t the kind of faith Jesus affirms.

We can think, for instance, of the flawed faith in John 2:23-24 where “many believed . . . but Jesus on his part did not entrust himself to them [lit: “believe in them”]. In other words their faith wasn’t the real thing even though they had was some sort of appreciation for Jesus.

I was once in that place. I thought I was a Christian and then I actually met Jesus. Afterwards I wondered how I had attended church for so many years without ‘getting it.’ My claims of faith amounted to a sincere charade—the art of acting as if I knew him when we had never actually met.

So after meeting him I became an evangelist to the church.

Who needs this evangelism? A group in any given church that is bigger than we realize, but never a group we can know with certainty. That knowledge is God’s turf.

Yet Jesus gives us some clear indicators of the need. Those, for instance, who don’t see Jesus as wonderful are signaling that they’ve never met him. He’s more attractive than any of the things he has created, so to meet him is to taste the greatest goodness of all. And, with that, his impact on all who meet him is consistent: he stirs a spontaneous and persistent love that reciprocates his own love.

So once this encounter takes place the person who meets Jesus begins to read and respond to the Bible as a way to hear from a dear companion. True faith always engages what Jesus says. He said as much to a crowd who professed to have believed in him: “If you abide in my word, you are truly my disciples . . .” (John 8:31).

Yet in this John 8 setting the ‘believers’ he was speaking to only wanted a part of what Jesus offered, not Jesus himself. And this utilitarian approach to faith had a corollary: a distaste for his teachings. And because of that distaste Jesus charged this clan with being aligned with the desires of the devil. Jesus also challenged them with a truism for the ages: “If God were [truly] your father, you would love me.”

Jesus offered another sign of true faith in John 13: a faithful love for others and for other Christians in particular.

This one is tough. It’s one thing to love other Christians who love us, but too many members of the church love very selectively. I can think, for instance, of various fence-building versions of faith where love is conditional: limited to those who affirm particular creedal, behavioral, or denominational commitments that make up their own version of the gospel.

The Pharisees in Jesus’ time were experts at this conditional sort of caring: “we’ll love you if . . .”   Jesus, by contrast, loved the world even as the world moved to kill him. His treatment of Judas at the last supper showed this sort of love.

John, with Jesus in mind, crystallized the point: “If anyone says, ‘I love God,’ and hates his brother, he is a liar; for he who does not love his brother whom he has seen cannot love God whom he has not seen” (1 John 4:20).

The basis of this evangelism? Christ’s call for us to love God with all our heart, and to love our neighbors too. It’s that simple. Jesus made this the ultimate measure of his own evangelism.   And many of the ordinary people of his day responded but not too many of the scholars.

Many of the religious leaders, in fact, weren’t happy with his emphasis on God’s love. And that’s what got Jesus crucified.

So be alert to the implications of this kind of evangelism—there’s a very high cringe-factor in being crucified! But it’s what Jesus called for in John 12:24 and what Paul affirmed in Galatians 2:20. Read these texts and see what you think.