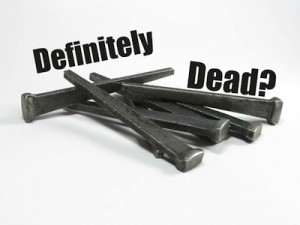 Yesterday I was able to finish up the series in Galatians that Ron and I have been preaching (the audio is available on the Resources tab).  In the final verses of the letter Paul offers another brief summary of the big two themes of his theological argument in the letter.

First, that he wanted to boast in nothing except the cross of Christ – the Promised One who gave himself for us.  This is where the body of the letter had begun: “I’ve been crucified with Christ . . . who loved me and gave himself for me.”

Second, that the only thing that matters is the new creation – a reference in this context to the New Covenant work of the Spirit in the believer to bring us into relationship with our Abba, and to transform us from the inside out.  This is where the body of the letter had ended, with an emphasis on the Spirit’s work to transform us into those whose faith expresses itself in love.

It really struck me how certain Paul was that when Christ died, he died.  In chapter 2 he put it this way, “I’ve been crucified with Christ and I no longer live, but Christ lives in me, and the life I now live in the flesh, I live by faith in the Son of God who loved me and gave himself for me.”

At the end of the letter he reiterates this fact – “through the Cross of Christ the world has been crucified to me, and I to the world.”  Good Friday really is about death.  Jesus’ death, and Paul’s death, and ours.

For Paul, that old fleshly life, with its impulse to live in rebellious independence from God, is dead.  He wants nothing of what had so gripped him in the world before.

Paul, of course, was a sinner before Christ got hold of him.  We think of his acts of religious terrorism, his persecution of Christians.  But let’s not miss that this was religious.  In his own mind he would have been a very good person!  As he lists his religious CV in Philippians 3, we get the sense that he was the very best of the best!  Yet compared to knowing Christ, all of that was worthless.

I wonder if I am really gripped by what it means that my me-powered, self-defined and self-oriented goodness is now dead?  Do I realize that Jesus came and died for my sins, all of them, even the “sanctified” ones?  Do I realize that before God, my righteous acts are as filthy rags?  Paul was as godly as they come, by fleshly religious standards.  Yet in Galatians he holds nothing back in urging his readers to look to Christ crucified and the work of the Spirit in us.  He offers no option of a partially by personal effort brand of Christianity.

I was struck by verse 17 of Galatians 6, where we see why Paul was so passionately opposed to an Old Covenant approach to Christianity.  It was because he carried on his body the scars of Christ.  That is, he’d been stoned and left for dead.  He’d been beaten with rods three times.  He’d been scourged with the forty-minus-one on five occasions.  And there was more, and much of it was at the hands of those committed to the fleshly religion he had been part of.  Every time he lay down, his body reminded him of why he was so passionate about the crucified Christ and new work of the Spirit.

As we come to Easter this year I want to fix my eyes on the One who loved me and gave himself for me.  And as I do, I need to ask myself if I am really convinced that when he died, I died.  If not, then I might make the mistake of trying to live in my own strength, of trying to be righteous by my own determination.  If I do that, then I am not doing well, I am demonstrating the fleshly rebellion of independence that required Jesus to die for me in the first place.

How about you, this Easter, are you definitely dead?