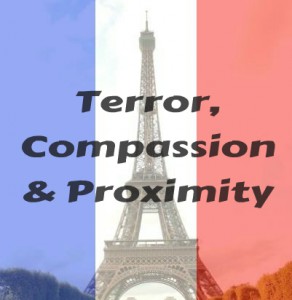 The terror attacks in Paris last Friday have saddened us all. In a sense we know, unless we are utterly naive, that this kind of attack is on the way. Nevertheless we so quickly settle into a false sense of security when these things are not happening right where we are.

I remember the morning of 9/11. I was in the USA and for a while that morning nobody knew how many planes had been hijacked. I remember the London bombings ten years ago.  We lived in Greater London at the time. Now Paris – just a short train journey away from where we are.  Proximity is an important element in our response to these events.

The day after the attacks I noticed friends changing their profile pictures on Facebook to a French flag (not something we English traditionally tend to identify with!) I thought about it and decided to do the same.

What has both fascinated and bothered me is the predictable pushback against this show of solidarity.

Here is the logic: since terror attacks and atrocities are occurring all over the world all the time; and since human life is of equal value whether it is a European victim or non-western victim; therefore we should not be showing particular solidarity with, or concern for, the situation in France.  To do so is evidence of a double standard.

It is certainly true that hundreds of acts of terror have occurred since 9/11, and yet to my shame I would struggle to identify more than a handful beyond the local ones I mentioned above.

It is also true that a human life in Europe is of the same great value as a human life in Nigeria, North Sudan, Syria, Iraq, Iran, Israel, India or Indonesia. Any death anywhere is a tragedy that was never part of the original design for humanity.

So is it therefore better if I don’t show solidarity with the hurting people of France right now?  That may be the fashionable opinion of many, but I disagree.  Why?  Because proximity matters.

1. To not show love for one who is near does not thereby show love for others who are far off.  My token French flag on Facebook reflects a private heaviness of heart for France, a country I have prayed for for years.  I also pray for other places further afield and I know something about the atrocities occurring in those places by people following the same evil agenda. By not showing love for the French I do not thereby show greater love for others. Dare I ask if all of those who are criticising the “popular” concern for France have, in fact, been carrying a great personal burden for all the other places we could list? Only God knows each heart in this matter.

Or to put it another way:

2. To not show love for a hurting neighbour is not to show some greater global concern, rather it is simply unloving.   Don’t get me wrong – a Facebook flag profile picture is neither here nor there.  But loving our neighbour in prayer and in action is important.  Imagine your next door neighbour’s spouse dies suddenly.  Would you show love and respect?  Would you offer any appropriate act of kindness you could?  Of course you would.  You certainly would not refuse to show your concern because there are millions of people losing spouses across the world every month – that would be a bizarre thing to mention. Proximity makes a difference.

3. When we show love by drawing near to those we care for, we reflect the heart of our God – the only one who can solve this and every evil problem.  Of course we should be praying for governments as they contemplate how to deal with the global agenda of those behind these terror attacks. But both diplomacy and war is ultimately futile in changing the hearts of those who do not want you to exist. No, ultimately it is only by the intervention of God that evil will be defeated, hearts changed, and true peace established.

God knew that proximity would be a key part of his great strategy against evil and sin and death.  God, our very present help in times of trouble, is a God who does not stand aloof and demand our acts of sacrifice for him. Rather, he is a God who steps into our world to walk alongside us, to be with us, and to die as a sacrifice for us. Praise God that the incarnation screams proximity for our sakes!  Christmas is part of God’s great plan to defeat the real of darkness.

So as our hearts are gripped by his compassionate heart, may our hearts increasingly reflect his.  As our hearts are stirred by the evil at work in our world may we draw near to the God who first drew near to us and pray for the hurting and grieving in France, as well as those who were involved in the evil plans. May the pain in our near neighbours sensitize our hearts to the numerous other situations where the thief is continuing to steal and kill and destroy around the globe.

Maybe being near to the God who draws near to us in Christ and chooses to live in us by His Spirit might even stir us to draw near to others who are hurting. Who knows, perhaps as terror comes near to us it will be our reaction that helps to win many to Christ.  Perhaps as terror bursts the bubble of Western security more of us will be stirred to be like our missionary God and draw near to those far off with a heart changing message of God’s goodness.

Go to France as an ambassador for Christ, or go to Africa, the Middle East, central Asia, the indian subcontinent, southeast Asia…the world needs a new wave of Christ’s representatives who will show what a good and going God of love is like.  But whether you go to Jakarta or just across the street, be sure to go to God’s throne in prayer.  The world doesn’t just need a show of unity and solidarity – what it ultimately needs is to know the true God who has drawn near to us in Christ!