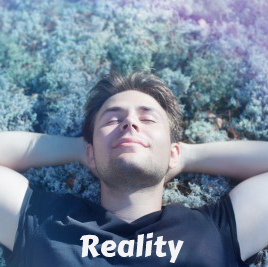 What is real?  What is unreal?  And how can we know the difference?  It isn’t always clear.

Today, for instance, we have feature length movies with computer-generated scenes so we might not know at a given moment whether the actor is doing something humanly possible, though exotic, or if he’s being portrayed by some digitized nonsense.  We only get the answer when something completely impossible pops up.  But we don’t mind as long as the storyline is compelling and overlaps, however loosely, with our real world experience.  Fantasy can be captivating.

In fact most of us like impossible dreams.  Think of our childhood fantasies of growing up to be a star athlete, a renowned musician, a space traveler, a prime minister or a president.  The concrete reality is that few if any of us ever make it!  And even today we may still be creating fantasy relationships, hoping for implausible jobs, and searching for pots of gold at the end of rainbows.

The reality of fantasy, in fact, is so widespread that we normally treat our mental meanderings as harmless.  Yet dream worlds can be a problem—even dangerous—if we mistake fantasies for realities in ways that matter.  I can recall an extreme case from my days as an aide in a hospital where I worked in the mental health unit.  In the middle of a shift a patient who struggled with extreme paranoia ran up to me.  “Am I bleeding?” he asked.  “Look at the back of my head!”

I looked and he was fine—not that I had any doubts before checking.  When I reassured him he relaxed a bit but he was still troubled.

“See that man over in the corner?”  He was pointing to a husband visiting his wife in the Dayroom.  I nodded, yes.

“He has a gun and he just shot me in the back of the head!”

“Oh, good!”  He was visibly relieved and walked off.  But I knew he would back before the shift ended with new variations of his real but unfounded fears.  He simply could not tell the difference between the real and the unreal, so his life was a disaster.

In some measure all of us are like Gary.  We live with unreality as if it were the truth.  And in many cases it’s harmless.  Think, for instance, about quantum physics.  Few of us have a clue about what it involves as we live happily with naïve perceptions of how the universe operates.  We’re fine as long as our immediate world remains predictable.

In other cases—as in what the Bible offers—many live on the basis of spiritually dangerous fantasies.  Think about it.  Are the vast set of world values and assumptions that dismiss Bible values today simply innocuous; or are they matters that call for concern and for change?  Will the reality of a living God startle us in a future day?

Is it, for instance, better to give or to receive?  Do we count others more important than ourselves, or the other way round?  Do we love God with a deep and growing delight; or do we treat our own status and security as primary?  Is nature as described by secularists our framework for understanding life and meaning; or do we recognize God’s creation and his constant providence as our basis for life?  Do we love power, or do we live by the power of love?  Do we treat this life as an end in itself, or do we see eternal life with Christ as our true home?  In each of these oppositions one or the other is illusory and the other is a bedrock reality.  Discernment is crucial.

The Bible sets us up to be discerning.  The world of faith in the Bible offers us reality.  And the Bible also warns against a fantasy world offered by a spiritual prince who rules all who are “sons of disobedience” (Ephesians 2:2).  Which is right and which is wrong?  Is the stuff of our lives a fantasy formed by spiritual indifference or a tapestry woven by our faith in the one who called himself “the Truth”?

Everything depends on our getting it right.  Thankfully Jesus tells us that if we abide in his word we can know the truth and that will set us free.  I vote for reality!

Table Fellowship
The Self Shift