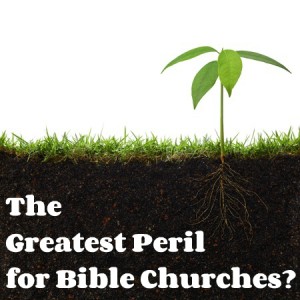 Mark’s all-action Gospel is interrupted twice by blocks of teaching from Jesus.  The first, in chapter 4, feels so familiar.  A man went out to sow.  (Yes, we know that one.)  One type of seed, four types of soil, most unfruitful, only good soil really gives life, etc.  It is a familiar passage.  It is both a comforting and a discomforting passage.  But perhaps its greatest treasure for many of us is the warning it sets up.

It is comforting to know that even though a lot of seed sowing ministry feels very unfruitful, this is what Jesus anticipated (and demonstrated).  He was the perfect evangelist, but he didn’t seem particularly good at Public Relations (if 100% followership was the goal).  While it is God’s prerogative and not ours to prepare the soil, or harden the already resistant heart, we can rest in the reality that a significant proportion of the soils ultimately don’t bare fruit.  Not a cause for complacency, but an encouragement when ministry results don’t always match our prayers.

It is discomforting to notice that the first two soils are “immediately” snatched or withering, but the third takes time to be choked.  It is possible for a stalk to grow and fight for its position, standing tall and looking impressive, but ultimately to be useless because there is no true life in it.  It would be nice to be able to spot that instantly, but the choking effects of the cares of this world and desires for other things take time.  If all three of the disappointing soils were immediately disappointing, we might grow complacent since we have been around longer than “immediately.”  The implicit warning of the third soil becomes overt soon after.

Here’s potentially the greatest peril for Bible Churches.  Right after the parable is explained, Jesus goes on to the next parable, but notice verse 23, 24… At the end of the parable Jesus finished an apparently obvious observation with a cryptic comment about whoever has ears to hear (v9).  Throughout the explanation he underlines the issue of hearing.  Then in this postscript, a blitz of hearing references set up his warning, “Pay attention to what you hear: with the measure you use, it will be measured to you, and still more will be added to you. For to the one who has, more will be given, and from the one who has not, even what he has will be taken away.”

Not a random comment about charitable giving, but a targeted warning about the state of our hearts and how we listen to God’s Word.  Hear well and abundance comes (like a 30-fold, 60-fold, 100-fold crop).  Don’t hear well and even the lively looking stalk will be ripped away.  There is no standing still with God’s Word.

I remember talking with an acquaintance a couple of years ago.  He had been one of the brightest and best students at Bible School, but had then turned his back and gone in other directions in life.  I was amazed by the questions he was asking just a couple of years later.  There didn’t seem to be much of a residue of Bible awareness and God awareness in his conversation.  He asked questions, but sounded like he knew almost nothing.  Frightening how fast it can all slip away.  Not that knowledge is the issue.  But knowing God is.

And if we ever grow complacent in our heart response to God’s Word, whatever our background, whatever the label over our church, whatever vibrancy we may think we have . . . well, we cannot stand still.  Let’s be sure that we continue to live in the reality of responding to God’s Word.  Let’s pray for ourselves and those around us to be good hearers, to have hearts hungry to hear from God.  What is the state of your heart, and mine, in respect to how we hear?  How are we when we listen to others preach?  How are we when the conversation goes to biblical things?  How are we in our own conversation with God?  Are we hearing well?

May Mark 4:1-25 do its work in us, and maybe if we need convincing, take a look at Psalm 1 as back-up . . . after all, we are not self-determined closed beings, but people made to live responsively to what we hear.

Conversion as Conversation
The Legacy of Everyday Moments

6 Responses to The Greatest Peril for Bible Churches?