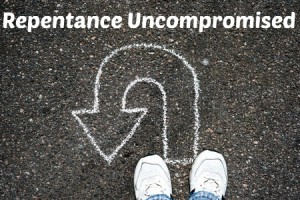 One of the greatest terms in the Old Testament prophets is the word “turn” or “repent.” The prophets spoke to a nation of God’s people who had consistently turned away from God and to others. They turned to Assyria or Egypt for support via political alliance. They turned to their own military might for confidence. They turned to idols for alternative spiritual assistance. So the prophets urged them to turn back to God.

Repentance is at the heart of Christianity. It has to be. And yet it is so often compromised in the way we present it or practice it.

Why is repentance important?

The Bible tells the amazing story of God’s grace in rescuing a sinful and fallen humanity to bring about a marriage between His Son and the redeemed bride. Ever since the fall into sin and death in Genesis 3, the starting point for this marriage has not been two neutral parties awaiting an introduction. The bride-to-be is spiritually dead and existing in overt rebellion against God and His Son.

God has initiated in stunning fashion. He has demonstrated his love for us through the death of His Son. He has paid the penalty for the rebellion, broken the power of sin and made possible a reconciliation between God and man. And as we read the prophets, we are reminded that God continues to work to graciously win the hearts of humanity back to him through providentially guided circumstances – both those that appear positive and negative from our perspective. God not only initiates, but He also pursues in His attempt to woo the hearts of humanity to His Son.

The Bible presents the work of God in redeeming us, the persistence of God in pursuing us, and the character of God in all of this. The character of God is startling to rebels like us. For instance, the prophet Hosea can characterize God as the God of steadfast love and faithfulness who desires that His people really know Him personally and closely. Hosea expressed God’s frustration that these characteristics were not the defining feature of life in Israel (see Hosea 4:1).

In light of who God is and what God has done and continues to do, what is the appropriate response? It is repentance. It is trust.

How do we compromise repentance?

I imagine going back to the day when I proposed to my wife-to-be. What if I had pursued her, cared for her, shown affection toward her, won her heart and then nervously orchestrated the circumstances so that I could propose to her in the right place at the right time. After my introductory comments, I drop to one knee and propose marriage. I am ready to give myself to this woman forever, to become one with her. I propose and she says yes. Would it make sense for me to follow up with a “well done” to her for saying yes? Absolutely not! That would be bizarre.

But a corrupted repentance will be seen as the responsibility of the repentant. It will be understood as something we are to do that brings with it certain benefits. Hosea saw through a false repentance in Israel.

Israel said the right words and looked like they were doing the right things. In Hosea 6:1 we see that they viewed repentance as turning to God rather than merely turning to better behaviour (a common area of confusion in our day). Their repentance was followed by religious acts of devotion. Remember, repentance is a turn to a person, God, not a turn to better behaviour. However, turning to God will be followed by changes in behaviour. Repentance that involves no turning from sin cannot be true repentance. But it is possible to turn from sin and not be truly repentant. So it was with Israel.

They sacrificed and gave offerings, but there was no steadfast love or true knowledge of God (see Hosea 6:6). In fact, God declared, “they do not cry to me from the heart, but they wail upon their beds and gash themselves for grain and wine” (Hosea 7:14). They turn, but their turn is not toward God (see verse 16). Their response was not what could be expected in light of who God was and what He had done.

What is true repentance?

In the last chapter of Hosea we get a clearer picture of true repentance. It begins with God – His steadfast love and faithfulness, His desire that we should truly know Him. It is His kindness that leads us to repentance (Romans 2:4). And then what do we bring? Commitment? Determination? Resolution? Do we get ourselves sorted and then come to Him for the reward of His love? Absolutely not! Do we bring promises and declarations that twist God’s arm into kindness toward us? No.

We have nothing. All we can bring are the words overflowing from a heart that recognizes its need of God. We will not trust in Assyria, in horses, in idols. We will not trust in our righteousness, church attendance, ministry involvement, giving to charity, turning over a new leaf, determination to never do that thing again. We have nothing. We come with empty hands. We are orphans coming to a God who gives mercy to the totally undeserving. (See Hosea 14:1-3)

Whether we are encountering God for the first time, or whether we have walked with Him for many years, the truth is the same. Nothing in my hands I bring, simply to the cross I cling. Repentance is not a work I am responsible to do. It is a response to God. It is a turn from every other plan and distraction and lover. It is a turn to Him, whereby in my absolute poverty I cast myself into His arms, trusting Him and only Him. Like an orphan coming home. Like a bride in His arms. Forsaking all others, Him. That is repentance. That needs to be at the core of our lives and our message.

A Clear Connection
Friendship with Jesus