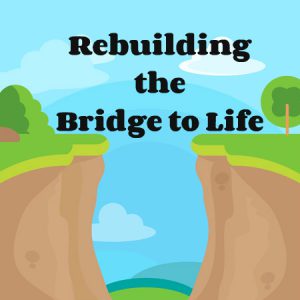 Most of us have seen or used the bridge to life illustration at some point.  Maybe you have even preached your way through it.  On one side there is God and on the other there is humankind, and they are separated by a chasm (sin).  Perhaps God is represented by a throne or a crown. Try as we might we cannot leap across the chasm or build a bridge of good works, so God has to do the bridge-building.  The cross is interposed and we can walk across to God.  Many people have come to faith with this illustration, so please don’t see this post as a criticism of it.

It is good to think through what is being communicated and I do think there are some concerning features of the gospel offered here.  For instance, let’s ponder the assumed motivation.  Are people really trying to leap the chasm to get to God?  Are people longing for closeness with the throne/crown authority figure presented in this illustration?  I don’t remember talking to someone who was desperate to get to God and disappointed that they could not.  Furthermore, the relationship offered seems ambiguous – what sort of connection will we have with this throne/crown if we do choose to walk his way?

I’d like to offer another version.  Why? Because it is good to rethink the gospel presentations we use. Even if we end up rejecting my modification, the exercise will surely be helpful in thinking through how we present the gospel.

Instead of having the human figure facing towards God and apparently motivated to move towards God throughout the illustration, let’s draw him or her facing away from God.  We were created for relationship with God but we have turned away.  Introduce the chasm (sin is our rebellion against both God and the love he has for us).  Now the illustration is ready to fill in.

Why do I like this adaptation of the classic illustration?

My goal is not to convince you of this illustration.  Perhaps you have another classic gospel explanation you have used – why not think through its weaknesses and modify it to better offer the richness of the good news?  (The judge doesn’t simply pay our fine, he also approaches the stand and proposes…for example.)

That They May Be One
Lost in Wonder on the Radio