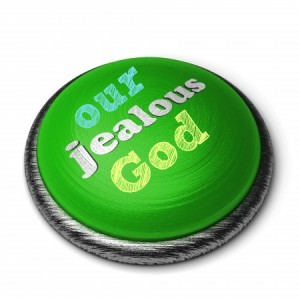 For a while any time I read that God is jealous, whose “name is Jealous” (Ex. 34:14), it didn’t sit well with me and left me confused.  How could God be jealous when jealousy is wrong? I always heard as a child it was wrong to be jealous of another’s skills, friends, possessions, etc. and even the last Commandment says do not covet.  That’s the issue isn’t it, we often equate covetousness with jealousy, and that jealousy can only be a selfish desire?  The question then, is whether we can reconcile the tension between a God who is perfect, yet also jealous?

Typically you’ll receive two answers.  First, some just explain this tension away by saying that God is God and he can have a double standard. Others will answer that God’s nature allows him to have two seemingly contradictory attributes, i.e. God is loving but also just.  These answers actually don’t help us, but rather blind us from one of the central messages of the Bible: the revelation of God’s personality.

I discovered his personality when I just started to read the Bible, cover to cover, a couple times a year.  In the Bible I found he is a lover who does everything on account of love. Adam & Eve were made to be in an intelligent and loving relationship with their God who loves them.  Sadly, we know the story went wrong and that they rejected their purpose as the Son’s bride, for the Father to be their Daddy, and for the Spirit to live in them. In Genesis 3 starts one of the main themes in the Bible: the continued rejection of God’s heart and our love for anything but him–that is, the theme of whoredom.

The clearest picture of whoredom found in the Bible is in Ezekiel 16.  Here God speaks of his people as a newborn baby abandoned to die by exposure.  He tells us that he saw her, gave her life, and, above all, offered to her his heart. When she had grown into a woman, God made her his bride and clothed her so extravagantly that all the nations knew of her beauty. But instead of complete devotion to the one that loved her, she took what she had been given, and gave it to other lovers. The rejection of her husband doesn’t stop here, but it’s so heinous I’ll let you read it for yourself.

So what’s God’s response to his “adulterous wife, who receives strangers instead of her husband!”?  He will judge her as any women who’ve committed adultery are judged–his “wrath and jealousy” will be upon her.

This shouldn’t be a surprise to us. Any husband that loves his wife and discovers her in the act of adultery will be rightfully jealous and seek justice.  Any jilted spouse that loves their partner would angrily respond, “Why are you doing this? Don’t you love me? Look how much I’ve loved you!” Isn’t this a proper response to such a situation?

The Bible declares to us from Genesis to Revelation that “God is a jilted lover!” Its not that he’s been wrathful and jealous for all eternity, instead, when his creation rejected his heart and continued to reject him, he became jealous. God is a lover who jealously pursues in order to win his creation’s heart back from other lovers.

What’s even more amazing about our jealous God is that his goal for judgment in Ezekiel 16 (stripping his bride of her renown, her beautiful clothes and jewelry, and leaving her naked, bare, and alone) is to make her stop playing the whore and to return to him.  God promises to atone for all that she has done and to establish a new covenant with her.  He promises a new covenant that we see later on in Ezekiel as God giving her a new heart and a new spirit, that his Spirit will be within her and she will walk in his ways and obey his instructions. In other places, we see God saying that he desires his people to call him “My Husband” not “My Lord” (Hosea 2), that God will celebrate over his people as a husband celebrates over his wife (Isaiah 62).

He’s not like most husbands who have unfaithful wives and therefore seek divorce: no, he hates divorce. Rather, God the Father, out of a love for his Son and his creation, sent the Son to the far country to win and wash his bride.  The Son went out by a love for his Father and his bride, to win his Father more sons and daughters who are deeply loved by the Father. And the Spirit that unites the Father and the Son, the communicator and the koinonia of the Trinity, is given to us and unites us to the Son, our bridegroom.  This is our God whose name is Jealous!

Let me encourage you, jump in the Bible, read it in a month or two and discover that the jealousy of our God is winsome.

One Response to Our Jealous God