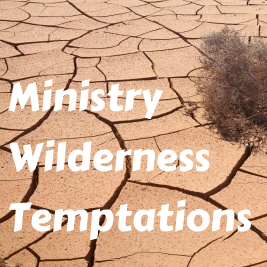 Jesus was tempted in the wilderness at least twice.  I know, there were three temptations, stones to bread, etc.  But I am thinking about the other temptation time described in Mark 1:35-39.  Mark launches his gospel with “a day in the life of Messianic ministry.”  During that Sabbath the first disciples got to see Jesus teaching, delivering a demoniac and healing Simon’s mother-in-law.  Then when the sun set and the synagogue shut its doors, with the four disciples putting their feet up and ready to relax, Jesus went through the front door and gave himself away healing the sick and demon oppressed late into the night.

Eventually the disciples did crash into bed.  Perhaps they pondered this calling to ministry with Jesus.  They were business men, after all.  And Jesus had invited them to be with him.  Maybe tomorrow they could start to help Jesus by encouraging a bit of fishing savvy on their new Rabbi?  After all, one thing fishermen know is that when you find a place with lots of fish you do two things.  1) You return to the same place, and 2) you go large – more rods, bigger nets.

Next morning the town of Capernaum was buzzing for Jesus, but he was not there.  The disciples hunted him down, eventually finding him praying out in the wilderness.  Maybe Andrew pulled out his flipchart so they could present their fishing for fish informed plan for fishing for men – Operation Capernaum . . . it was time to go large and be “big in Capernaum!”  After all, the day before had proven that fishing was good there!

Now Jesus got the benefit of his team of fishermen joining their skills to his as they fished for men, right?  Wrong.  This was a temptation moment for Jesus.

Jesus was being tempted to make the secondary aspects of his ministry profile the main thing, and to make popularity his main driver.  But that is not why he came to the planet in the first place.  He came to preach.  And he came with a bigger goal than just Capernaum.  So with disciples scratching their heads and a flipchart lying on the ground, they followed him to the next town, and the next, and the next. (Incidentally, Mark makes it clear that Jesus was not rejecting the ministries of dealing with demons or healing the sick.  Preaching the gospel turned over the rocks of peoples’ lives and demons resisted.  And Jesus may have been on a big-scale mission, but he was compassionately responsive to the individual leper who came and begged for healing.)

How often do we face temptations in ministry?  Temptations to lose sight of why we are here?  Temptations to drift from divine calling?  Temptations to pursue popularity instead of proper purpose?  I suppose there are obvious “sin” temptations we face: sexual immorality, financial impropriety, entertainment soaked laziness, etc.  But what about the lure of apparently good ministry?

Early years – the temptation to chase position.  I wonder if there is a commonality in the formative years of ministry involvement, which is probably our 20’s and 30’s?  I suspect that one of the biggest temptations we face is to chase position.  In these years we tend to have passion, but not necessarily position.  We tend to have more influence on others than we realize, but often don’t have the titles that seem to make a difference for people we look up to.  Somehow it seems easy to get our eyes off Jesus and start to chase the better titles . . . being a pastor would be cool, being the Pastor of Preaching at a bigger church would be cooler still.  Being a lecturer would be great, imagine being a professor!  Being a team player is not enough, but what about director?  Position chasing is definitely a temptation to be wary of in these years.  Much better to keep our eyes on Jesus and make gospel work our work, however he has wired us to participate.

Middle years – the temptation to chase power.  I suspect there may also be a commonality in the middle years of ministry leadership, which is probably our 40’s and 50’s.  I am not quite there yet, but observation and conversation leads me to think that one of the biggest temptations is to chase power.  In these years we will tend to have position, but not necessarily enough perceived power.  Somehow it seems easy to get our eyes off Jesus and start to consolidate power by whatever means we can.  Having influence is great, but wouldn’t it be greater still to be more powerful, more influential, more in control of more people and more situations?  Power plays are a temptation to be wary of in these years.  Much better to keep our eyes on Jesus and make humble Christ-honouring leadership in all our domains of influence our priority.

Later years – the temptation to chase peace.  I suspect there may even be a commonality in the later years of ministry transition, probably our 60’s and 70’s.  This feels a long way off, but I have seen enough to make me want to prepare myself for these years even now.  I think the temptation here is to chase peace.  True leadership requires energy to face both change and complexity, but these years can see  diminishing energy levels rob us of the motivation to face either.  Instead, having power, we will be tempted to wield that power to protect what we (or significant family members/friends) want to see sustained.  Somehow it seems easy to get our eyes off Jesus and start to chase peace by exerting the power we have.  Instead of being the wisest sages and greatest cheerleaders of the next generation of leadership, we find it tempting to cling on to power and systematically undo all the good we achieved in our earlier years.  We think we can achieve peace, but typically things will go quiet only because eventually people go somewhere else.  How beautiful when an older leader keeps their eyes on Jesus and transitions to a role of supportive sage and cheerleader emeritus as the years pass.

Position, power, peace.  All variations on chasing popularity instead of Christ-honouring ministry.  At the root of all three is pride and letting our eyes drift from Him to ourselves.  May we resist the ministry corrupting temptations facing us this morning!